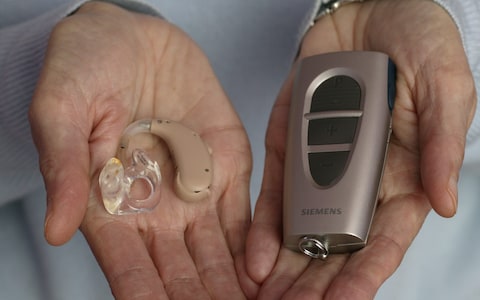 Sorry, not much positive for those still relying on sign language except that it slows down arthritis in some people.

Wearing a hearing aid can slow the progress of dementia by up to 75 per cent, according to a new study. Scientists believe that keeping older people engaged and active by adopting the devices can significantly reduce age-related cognitive decline. They followed the progress of 2,040 individuals between 1996 and 2014, asking them to complete word memory tests at various stages and monitoring the rate of decline before and after getting a hearing aid.

The research team found that while the aids did not halt or reverse cognitive decline, they slowed it down by three-quarters, meanwhile, in a separate group of 2,068 who underwent cataract surgery, decline slowed by around half.  The team at the University of Manchester said the strength of the association between hearing aids, cataract surgery and mental deterioration meant policymakers should consider hearing and sight loss screening for all older adults.

Dr Piers Dawes said: "These studies underline just how important it is to overcome the barriers which deny people from accessing hearing and visual aids. "It's not really certain why hearing and visual problems have an impact on cognitive decline, but I'd guess that isolation, stigma and the resultant lack of physical activity that is linked to hearing and vision problems might have something to do with it. "And there are barriers to overcome - people might not want to wear hearing aids because of the stigma attached to wearing them, or they feel the amplification is not good enough or they're not comfortable.”

The number of people in Britain suffering hearing problems will rise by 40 per cent by 2035 amid a rapidly ageing population, a charity has forecast. The charity Action on Hearing Loss believes the number of people suffering such difficulties will rise from one in six to one in five, as it called for more investment in treatment and research into hearing loss.

Despite this, only £1.11 per person with hearing loss is spent researching potential cures, compared with £11.35 for every person with sight loss.