Cops ridicule deaf and their dogs. 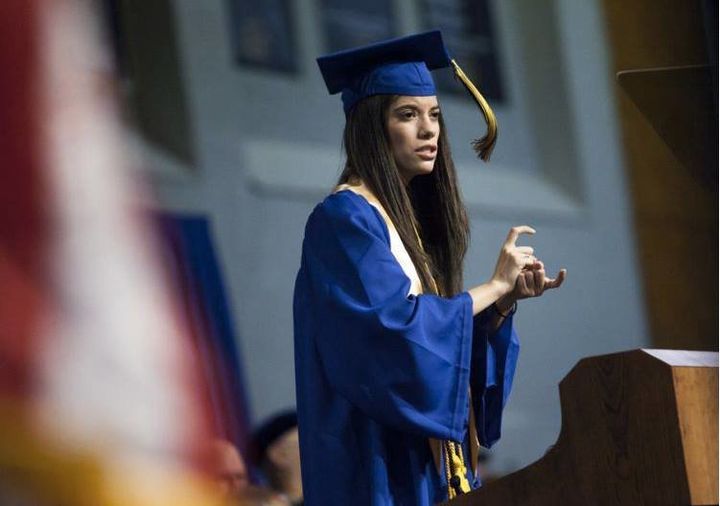 It is amazing adults are still struggling to ID themselves, but the struggle to be someone else will always end badly.  It is a fact such people are being defined by their communication and not as themselves. So how can an individual ID exist?

We didn’t know why I lost my hearing, and we still don’t. All we had was my audiogram (a hearing test) telling us that I had a moderate “hearing loss.” I was the only one in my entire school ― which serviced preschool through 12th grade ― who had hearing aids and the only one who was Deaf or hard of hearing. I was often teased, questioned and “tested” for how much I could hear by my peers. They’d cover their mouths and ask, “Can you hear me now?” like the Verizon commercial. Back then, being deaf (though I didn’t identify as such) meant to be different or abnormal.

When I was older, around 13, I still had never met another deaf or hard-of-hearing person. I had only hearing friends. I went to sleepovers, swimming parties and get-togethers where everyone spoke and it was noisy. I struggled to understand what people said, especially when I had to take my hearing aids off for a pool party or when it was time for bed at a sleepover. I had lots of good friends and I enjoyed hanging around them, but it was still work to catch everything they said.

I used to pray that if I behaved well enough and was good enough, I would be fixed. I would no longer be embarrassed when I didn’t understand what someone was saying. I never wore my hair up in fear that someone would see my hearing aids and call me “retarded.” I was tired of being asked if I was “like Helen Keller” or why I had these huge things in my ears. Then, being deaf no longer meant that I was just different, but it began to mean that something was wrong with me.

When I was 17, I started to get angry. I was tired of lip-reading teachers and people and going to loud places where I couldn’t understand anything. I was tired of feeling like I could not be a part of parties and the typical teenage experience because it was too hard to hear. I avoided loud, dark places and settings where it was difficult to read lips and match what little I could understand to what I could hear with my hearing aids.

I was dating a hearing guy at the time. Whenever we would go to friends’ houses or go out, I started getting angry when he begged to stay. I wanted to leave because I couldn’t hear other people. Most of the time, I just faked it by laughing along and smiling, but eventually, I started losing more hearing. Being deaf for me then meant being angry with everyone else because I couldn’t understand them, but they could understand me.

When I was 18, I was turning in my car and signalled my blinker. I couldn’t hear it, so I thought something was wrong with my hearing aids. I called the audiologist for an appointment and later found out that it was actually my hearing levels decreasing. “Sometimes it’s progressive,” the doctor said, unable to explain why the change in my hearing occurred. I went from moderately hard of hearing to severely hard of hearing/profoundly deaf, and in my mind, that meant my identity had shifted somehow.

I googled “What do deaf people do” and found an online message board that talked about rights under the Americans with Disabilities Act, interpreters, captioning and vibrating alarm clocks; I had never heard of any of these things. I thought subtitles were for foreign language films and never knew I could use captions for regular movies. I had been using my phone as an alarm and constantly missed the weak vibration of it, resulting in me being late for class or work occasionally. I thought interpreters and sign language were only for Deaf people who did not talk.

I began to think better of it, and I immediately got my audiogram and went to my university’s disability services office. I found out I was eligible for captioning services and was referred to a captioning telephone company, as well as classes in sign language at the local school for the Deaf. I suddenly realized that being Deaf meant I was not alone, not anymore.
I began learning American Sign Language (ASL) at 19 and met my first deaf friend (actually, the first deaf person I ever met) not long before starting classes.  As I started meeting more people who were Deaf, I was the happiest I had been in a long time. Finally, I met others who were like me. I maintained my friendships with my non-signing hearing friends who made the effort to sign and who accepted this new part of me, and I found, more often than not, my non-signing hearing friends were supportive.

At last, I could understand other people conversing with me, without working hard and without needing to rely on my hearing aids. Being deaf no longer meant darkness. It meant Deaf pride, confidence, access and support. I soon decided to explore the idea of transferring from my hearing university and going to Gallaudet University or the National Technical Institute for the Deaf at the Rochester Institute of Technology, two schools created for Deaf students. I visited both schools, and after some coaxing from friends, I decided to transfer to Gallaudet. With the support of my parents, I was ready to start my new journey. While I was at Gallaudet, they began their own journey learning ASL and attending Deaf events and Deaf education rallies.

I went from not knowing ASL or any Deaf people as a child to being the graduation speaker at the world’s only Deaf university.
At Gallaudet, I found a wide variety of friends. Conversation was never a burden, a hardship or a tedious task. There were many others like me who were new signers, and I had never felt so warmly embraced in my life. I had started to find my Deaf identity before Gallaudet, but once I had arrived, it began to solidify. I was in my element. Learning became easier, socialization was natural and my happiness was inevitable. Being Deaf meant freedom.

At 22, I graduated from Gallaudet with honors, summa cum laude with a 4.0. I went from not knowing ASL or any Deaf people as a child to being the graduation speaker at the world’s only Deaf university. I was soon headed off to graduate school for Deaf education and aimed to work in early intervention. After a few months, I moved back home and began working at a Deaf school as a substitute teacher. Seeing young students like me every day made me realize all of the opportunities I had missed out on in my mainstream school. Seeing all of the staff signing, seeing the access available all the time, was incredible. Deaf schools and settings felt like home to me.

Being Deaf now, at 27, means fighting for Deaf and hard-of-hearing children to have the rights and access I did not have growing up. I now teach at a Deaf school and I am a second-year doctoral student at a hearing university. I engage in research in hopes that I can support early intervention services, identity development and more. I want other Deaf and hard-of-hearing children to have what I didn’t. Being Deaf means supporting the Deaf community in all of our fights for access, but especially in ensuring the future of our Deaf children’s success and happiness. I now have a mix of Deaf and hearing friends, and some sign while some don’t. We work together in all that we do and embrace our differences. We all know that being Deaf is more than audiograms and hearing devices. Being Deaf now means being part of a community and a culture that accepts and respects the Deaf identity and Deaf journey.