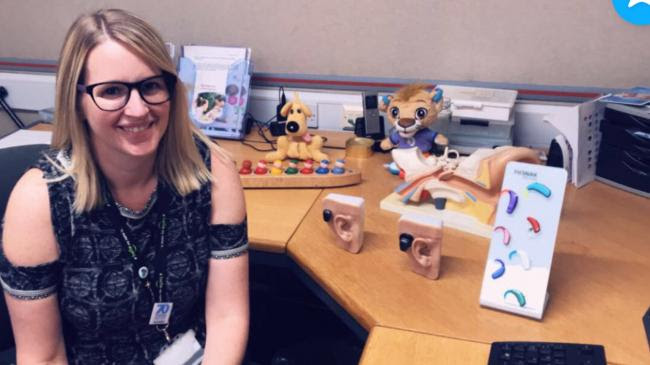 Do the profound deaf USE audiology services? You would think they at least know the hearing loss difference.

Michelle Johnson, 37, a highly specialised audiologist at Furness General Hospital, said: “We want people to know these sort of services are available and they provide vital support. The services we have coming on the day are massively essential to people with hearing difficulties or deafness.” The event will be held at the Cumbria Deaf Association in Duke Street, Barrow on September 20 from 3pm and is open to deaf or hard of hearing families as well as professionals involved with them

Thank you for writing to the Department for Education.

The government recognises the cultural significance of British Sign Language (BSL) as the first or preferred language of an estimated 70,000 people in the UK.

The Government is open to considering a proposal for a BSL GCSE and would welcome a proposal for consideration at the earliest opportunity. If the proposal meets the expectations for GCSEs and a BSL GCSE is ready to be introduced in this parliament, the government will then consider whether to make an exception to its general rule that there should be no new GCSEs in this parliament.

Introducing a BSL GCSE is different from making it a national curriculum subject. The national curriculum, introduced in maintained schools from 2014, was designed to reflect properly the body of essential knowledge in key subjects, while leaving teachers scope to use their professional judgement to design curricula and offer additional subjects that meet the needs of their pupils - which may include BSL.

In addition to meeting the statutory duties to teach the national curriculum, maintained schools are free to teach any other subject or topic they deem relevant for their pupils, as part of the school’s wider curriculum.

As part of our commitment to improving the service we provide to our customers, we are interested in hearing your views and would welcome your comments via our website at:

BSL WON'T be a core subject of GCSE's.  Any such inclusion would have to be an exception but still have to conform to current curriculum/teaching norms.  The DoE 'May' consider is pretty vague a response, and isn't an acceptance of a BSL course at this time.  Whilst the DoE is recognising preferred communications for some deaf it still has to take into account the majority who don't, thus to avoid 'tiered' educational approaches, bias, and lowering of current standards..  It is in effect just saying OK, some deaf use BSL.

'Immersion BSL' in education, which ATR asked the minister about was left unanswered.  Current systems (Official), say there is no leaning towards any single primary communication approach in deaf child education.  This follows the 'Each according to need' policy.  (It has to be flexible to meet all deaf and HoH children's needs).

English literacy will still be a primary requirement.

ATR has pointed out on many occasions (As have the relative deaf charities and BSL lobbies), that there is inadequate support or trained staff to make such a class effective at this time, at best the classes would be randomly sited, not a UK norm,.  There is insufficient back up in classrooms in the mainstream at present, also no agreed BSL norm approach settled on as yet to use as a basis of teaching.  There are still issues of regional sign usage and acceptances, any set class on BSL would require the Deaf to accept a norm that can be used nation-wide.

It would at best, reflect current random BSL approaches in LEA and other class tuitions for hearing, (there are no sign classes for the Deaf). Each current hearing class appears to have own norm, often using different approaches to the college run coursework (which is primarily not BSL but cultural/history approaches).  Most cultural references are also not in a visual form but in hefty tome's printed in academic-speak.  There are still primary issues of there being no valid sign for many terms.

Many were tried out (Some claim invented to fill space by un-academic deaf), in the original 1992 dictionary of BSL which was later panned by the deaf themselves  Other references are on a medical/clinical overview of deafness and loss, which deaf reject as material.

The minister could not be drawn on questions ATR asked regarding the GCSE suggestion, e.g. if culture would be included as part of an BSL advanced tuition.  Teachers of the BSL have no organised cultural academic approach to use at present.  Not everyone is happy with the dictionaries/programs of BSL either which are not allowing for a norm to be established or are being developed by proper academics and accredited.  The Deaf appear to be accrediting themselves via own rules, but hearing coursework going own way.

The minister would not be drawn to answering the most vital questions, although an e-point was listed to respond to, it failed to respond to ATR.  The overall 'image' is that the appropriate words have been used to placate the BSL lobbies but on an official level suggests that lobby would have to alter BSL approaches to conform to the national curriculum norm, which the Deaf were unwilling to do.   Also, any decision deferred ad infinitum, at a very minimum not until a new government (2012), has been elected, as changes to GCSE's are not allowed in this parliament.

Deaf want BSL taught with culture in tandem.  The Minister has said she would prefer that the class (After meeting curriculum rules), concentrates on communication and bilingual qualifications.  The Deaf won't be allowed to dictate own approaches in UK schools.  Looks like only a free-for-all would exist at best and only in areas of high deaf concentration.
Posted by MM at Wednesday, August 29, 2018 No comments: