What a politically correct mess! #pleasenothere
Posted by MM at Wednesday, October 03, 2018 No comments:

The result of Deaf insisting they aren't disabled.  Then it doesn't qualify them for help to manage it, be careful what you wish for?

Almost every week we hear the NHS has increased spending for smokers, drinkers and obesity clinics (some of these symptoms can, with a dose of will-power, be dealt with by the individual), while cutting services for others.


Deafness is the disability that is at the bottom of the queue as far as priorities go. I believe you don’t qualify for a Blue Badge for your vehicle, but people who don’t drive obtain one just for sitting in a vehicle while someone else drives them around.

Some disabilities are entitled to a reduced fee TV licence. Losing one’s hearing IS a disability. It’s about time deafness had more consideration in the NHS.

Email ThisBlogThis!Share to TwitterShare to FacebookShare to Pinterest
Labels: access to health, ATR, ATR UK, deaf and hard of hearing 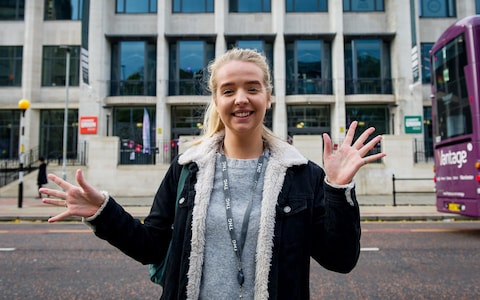 OMG, and these people are the future... [Snow-flake alert]. We are just awaiting indignant deafies objecting to students taking the piss...

The student union at Manchester University has banned clapping and replaced it with "jazz hands". The decision has been met with widespread derision on social media. Jazz hands — waving both hands — is the British Sign Language (BSL) equivalent of clapping and has been introduced to ensure deaf and autistic people do not people left out. But the decision has been greeted many on social media as a sign that political correctness has finally gone too far.

News of the measure was met with criticism in some quarters, with broadcasters Piers Morgan and Jeremy Vine among those weighing in. Broadcaster Piers Morgan said Britain was "losing its mind" and journalist Jeremy Vine tweeted a picture of British soldiers in the trenches during the First World War, which ended 100 years ago next month.

It's the 'Snowflake Generation' Again. Many others on social media suggested Britain was becoming a nation of mollycoddled "snowflakes". But one mother, speaking on BBC Radio Five Live on Tuesday, October 2, said clapping could be very intimidating to autistic people.

Clapping is banned at the University of Manchester Student Union events "to avoid triggering anxiety and improve accessibility." Students will instead use silent "jazz hands". Glad some brave young souls decided to ignore the difficulties caused by sudden noises 100 years ago. Sara Khan, a student union officer at Manchester University, said traditional clapping was problematical for students with autism, sensory issues or deafness.