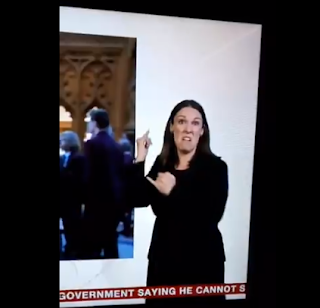 Whatever happened to BBC neutrality of reporting?  Is it necessary to pull extreme faces to make a deaf person understand?


A sign language interpreter for BBC News has gone viral after she perfectly conveyed what one viewer described as the "perplexing f**kery" of Brexit. The video was taken during a lunchtime broadcast on the BBC World News channel on Thursday (November 15).

The interpreter can be seen reporting the latest Brexit developments on a day where two cabinet ministers resigned, a number of political figures expressed concerns about the proposed deal to leave the EU, and the phrases #BrexitShambles and #BrexitChaos trended prominently on Twitter.