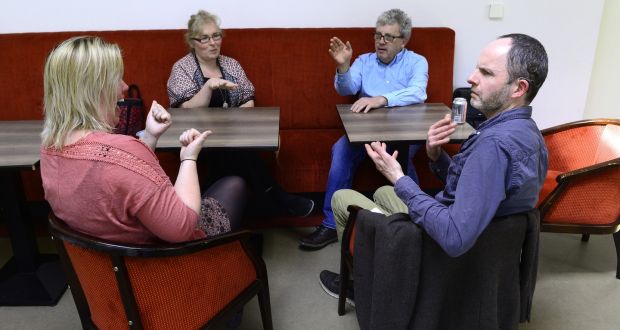 A common statistic quoted by organisations working for deaf and hard of hearing people is that about one in 10 of us has a hearing loss to some degree.


That’s a lot of people. Of course, the condition of having a hearing loss can range from very mild loss to profound deafness, with far, far more people experiencing losses at the milder end of the scale. Indeed, according to Chime, (formerly Deafhear), about 300,000 adults here have a “significant” loss (meaning moderate or greater), and only half of them have ever gone for a hearing test, never mind be prescribed hearing aids.

By contrast, it is estimated that there are about 5,000 who use Irish sign language (ISL) as their first or preferred language, and who would tend to be predominantly – but not exclusively – profoundly deaf. It’s always struck me that, of those deaf or hard of hearing people who choose to be part of any community of people who all share a similar disability, they would gravitate to either the strong, closely-knit deaf community or one of a number of hard of hearing support groups or organisations.

ATR Comment:  "But you DO have to learn sign language.  Statistics worldwide suggest that despite deaf signers being outnumbered 100s, or 1000s to 1 by others with a hearing loss, there has been little or no attempt to integrate with them in their clubs.  The annoyance still remains of Deaf people using the 1 in 10 stat when it does not include them to gather support for their own area where HoH are not.  The article looks more like a veiled plea to save a diminishing Deaf community by opening the doors to people, who on the face of it, would prefer not to use sign language or support deaf cultural aims or directions either.  Both areas are currently polarised by the clinical v disability approaches and as a preference, and these are the primary divisions that prevent real integration, also, HoH would prefer to reintegrate with hearing.

ATR has covered numerous debates as to "Where are the HoH now?"  as their previous campaigns to get access via their modes appears to have ceased or barely registering.  Many suggest the reason is technology has replaced access campaigns almost entirely.  Other less advertised 'contentional' views are an aversion to sign itself, and being re-identified as Deaf.   Mutual acceptance hiding a multitude of real sins by omission.

Most have already accepted polarised support, charitable and social systems too.  While there is no direct 'conflict' between the minority and majority areas, there are still skirmishes and some heated disagreements on how to approach issues of hearing loss and profound deafness, CI's and the closure of deaf schools just two of them, the 'cure' being another.  HoH etc would be asking what is in it for us? and would deaf adapt as they expect HoH to?  There is no indication deaf signers would adapt to HoH social aspects and even suggestions it isn't possible hence why they are inviting others in instead of them moving outward.

Sadly an acceptance the twain does not meet combined with a pretty pathetic 'cest la vie' attitude that accepts integration isn't currently possible or preferred, still reigns supreme.  The only level we see some partial 'integration' is via deaf clubs with predominantly aged and infirm people.  These are a struggle to maintain because they aren't managing to survive, LA's closing them down for cost purposes.  The Deaf community has lost over 376 in the last 20 years mainly due to local authorities withdrawing funding for them too, and deaf unable to pay their way to keep them open.

The deaf culture such as it was, remained very reliant on the system paying their rents and building clubs for them, and that is no longer viable.  The nature of deaf clubs led to many a downfall, because of the nomadic nature of memberships of deaf clubs, deaf would go from one to another to maintain their socialising, but the last 10 years Local authorities demanded they would only fund for deaf living within their areas and insisted other areas have to provide for their own deaf.  This exposed the reality where only a minority of deaf signers existed and were supported by deaf from other areas, meant in some case an 80% reduction in deaf people a local Authority was obliged to support.  100s of clubs closed overnight because locally there wasn't enough to maintain a club for.

HoH clubs were/are notorious for being unable to attract members at all.  Many struggled to get 10 through the door once a month.  HoH don't want clubs just for them.  Some LA's started demanding Deaf clubs  HAD to accept HoH and hearing as members, or funds would be withdrawn citing such clubs were discriminating.  It was only stopped because the culture card was used.   The HoH view fed into the reluctance to go to deaf clubs too.  It is said the HoH still do not see the value of sign language to them because the deaf area remains isolated despite its use.  The Deaf community has never managed to attract HoH, is it far too late to start now?

ATR would question if it is the hard of hearing obligation to save the deaf community."
Posted by MM at Wednesday, March 20, 2019