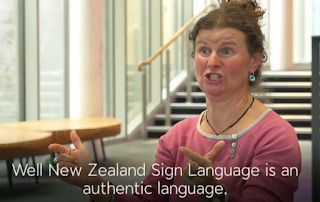 NZ was jokingly reviewed by Brits as 12 years behind everyone else, rather a revelation to see they are even much further behind than we thought.  Resurrecting the 19thc does not seem a way forward for the deaf to me... we are still trying to drag them out of the 20th.  Creating oppression when there isn't any relying on the experience of people dead 140 years ago doesn't seem relevant today.  Or the fact sign was really developed at that time.  So we have moved on, it's called progress.

E.G. Deaf schools closed because we are being INCLUDED, no bad thing (depending on where you hang your cultural hat.)  Erm.. supporting A G Bell won't win you plus points in the USA they hate the poor bloke, he's dead too but they won't let him stay dead insisting he still sneaks about haunting the system by offering alternatives to silence and sign language.  The ID crisis is self-inflicted because it is culture versus inclusion. Instigated by the abler savvy deaf who profit from maintaining deaf isolation and constantly updating the martyrdom approaches with paranoia.

Despite being made an official language in 2006, the history of New Zealand Sign Language (NZSL) is coloured with discrimination, and its future is equally as murky.  In 1880, teachers of the deaf gathered in Milan, Italy to discuss the future of Deaf education. In the forefront of discussions was the existence of sign language.  Deaf schools in Paris, France had experienced great success with sign language, using Deaf teachers to teach Deaf students.

These teachers used a holistic approach to instruct students in sign language, anchoring their signs in real life objects and concepts. The approach was so successful that some students went on to become Deaf doctors or lawyers.  However, at the time, prominent US inventor Alexander Graham Bell had achieved great results with teaching Deaf family members to lip-read, and this approach was brought to the Milan conference with much interest.

In addition to this, the Catholic majority of Spain at the time felt that sign language was an inappropriate method to talk to God. They believed that to speak to and be close with God, one needed a voice, and sign language did not fit that belief. There was a perception that the sign language community was closed off from mainstream society, and this needed to change.

This all culminated in the Milan conference in 1880, which possessed merely two Deaf teachers, deciding to effectively ban sign language worldwide. Many Deaf people lost their employment, including Deaf teachers, and in some instances children were strapped or caned for using sign language.

Around the same time in New Zealand, the government established the first Deaf school in the Christchurch suburb of Sumner and made the decision to incorporate the ruling from the Milan conference.  Deaf children in New Zealand were required to be separated from their families and live at the school, where sign language was forbidden. Lip reading and speaking were the only means of communication allowed, but was not the only means that existed in Sumner.

Forbidden from signing in public, students would communicate through sign after dark in the dormitories, and this underground signing was what lead to the development of NZSL. Rather than quashing sign language, the conditions in Sumner in fact lead to the birth of a wholly distinct and unique language. After students left the Deaf school, there was a desire amongst them to create a Deaf space - a place where they could socialise, and sign. This led to the establishment of the first Deaf clubs, spaces for the community to gather and exchange experiences. The schools and clubs all fed into one another and made for a rich, developing Deaf community.

However, the present situation of NZSL and the Deaf community today is a far cry from the past. With Deaf schools closing and Deaf children forced into the mainstream, there is significantly less NZSL and Deaf culture exposure.

AUT Deaf studies lecturer Rachel Coppage fears that, given time, this could lead to the erasure of NZSL. She worries that with Deaf youth unable to easily access their culture, they can find themselves adrift and experiencing what she refers to as "an identity crisis", unable to fit in either the hearing or Deaf world. The fragmentation of the culture, and a declining Deaf population thanks to medical advancement makes for an uncertain future.

Email ThisBlogThis!Share to TwitterShare to FacebookShare to Pinterest
Labels: ATR, ATR New Zealand, Deaf, Milan and all that