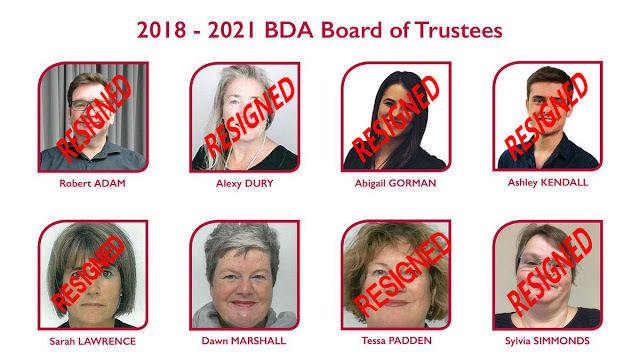 Another Trustee of the British Deaf Association (BDA) has resigned from the Board - Sarah Lawrence, making that seven Trustees who have resigned in the past four months - leaving just two trustees remaining on the Board - the Chair, Agnes Dyab, and Dawn Marshall.

Can the BDA function with just two Trustees? Its constitution suggests they need an absolute minimum of three.  Neither Agnes Dyab or Damien Barry (the Company Secretary) have yet been very forthcoming about the reasons for mass resignations, but claim the will inform BDA members at some point re the demand for an EGM.  They have refused point-blank to respond to ATR regarding answers about allegations of systematic bullying by the BDA executive reported on social media, or threats from the BDA executive on members who go public with concerns warning them of 'gagging clauses' banning them from raising issue outside the BDA itself.  That 'cat' seems now out of the bag.

The policy of notifying members direct with a proviso not to let anyone else read what they say.  Why all this secrecy at the BDA? and 'closed-door' approaches to members concerns?  Members so far have heard nothing tangible about an EGM from the BDA to ask the questions members want an answer too. There are real concerns the 129-year-old BDA could collapse completely. Official responders at the BDA had 3 weeks, (until 12th September), to reply.   There are also social media rumours petitioners are considering taking over the running of the BDA itself and sacking the two trustees left.

This bodes ill for the BDA already in financial deficit. Considering this dated charity and old-fashioned setup has had its day, one asks the question why bother?  They have never been an inclusive organisation and clearly unable to cope or manage in the 21stc.  The approach of dogma before practicality has held the members together for many years but, it's not viable today, and the AOHL has already off-loaded the BSL user because of such negative approaches a done-track approach to including the deaf based on keeping them isolated.

Deaf can sign and still campaign without any charity backing them, and is.  Young deaf won't allow such areas to pigeon-hole how they live.  This seems to be amply made aware in that the young and forward-looking deaf trustees and members have decided the BDA is no longer for them.  Are petitioners aware they can go direct to the charity commission now that the minimum trustee requirement has been breached?   That mass resignations are public domain?  This must suggest to the charity commission there are serious issues to be addressed at the BDA?

VIDEO  Another area the BDA prevents anyone from embedding what they say elsewhere.

Abigail Gorman.  Why I resigned....

MY RESIGNATION FROM THE BDA

TRANSCRIPT: I’m sure some of you know that I’ve decided to resign from the BDA. I’m gutted about this. I’m currently working in Paris, so I’ve been unable to reply to some of your texts. I thought it would be best if I made a video about this instead. I have thought long and hard about making this video, but I felt that it had to be done. This is an excerpt from my resignation letter.

‘I truly wish it wouldn’t come to this, but I don’t feel that this board has been managed accordingly. I joined this board because I wanted to make a difference to the lives of our members. I wanted to make sure that the BDA was an organisation that had its members’ best interests at heart and would use its resources to ensure that their identities were recognised and strengthened. I don’t feel that progress has been made, nor team building or motivation.

In my board application, I spoke about transparency. ‘An open dialogue that fosters honesty and transparency between the community and its Board, one that calls us to collective, responsive action.’ Instead, I have found myself being left in the dark about most things and this has frustrated me to no end. This is not how a board is meant to function. We are letting our members down. I cannot be a part of this incompetence and obfuscation and so would like to tender my resignation with immediate effect.’

I feel incredibly disappointed that this happened because I really did want to make a difference to the lives of our members, especially the women, LGBT+, BAME, youths and the elderly groups as I feel that they have been underrepresented.

However, I don’t feel that I have been able to make any progress in this current board because too much focus has gone into things that, although important, are things that can be reviewed at a later point. There are two sides to every story, and I can see both sides. However, it is hard to see what came first, the chicken or the egg. Is that behaviour a result of that or is it vice versa? It is hard for me to comment on, and it has taken an enormous toll on my mental health and wellbeing.

As we signed a confidentiality form when we joined the Board, there are some things I cannot talk about, and I understand that that must be frustrating to you all. But I will say this, things need to change.


However, I do want to point out that the staff has done exemplary work throughout the years and I do not want this to overshadow their hard work and efforts. The BDA has always been, and will be the organisation that fights for deaf people, and I ask that you don’t lose faith in it because of current circumstances.

As ATR said. Too much Dogma, not enough focus ON deaf need, and far too much secrecy.

In the absence of any response from the Board to our call for an EGM, I am exercising the right to take ownership of the arrangements for the EGM in line with section 305 of the Companies Act 2006.

I do this on behalf of the members who supported the petition and call for an EGM which was submitted on 22nd August 2019 and which required a response from the Board within 21 days. This deadline expired at midnight on 12th September 2019.

I shall be arranging to visit the BDA Head Office in order to discuss and effect these arrangements, and, to film the information so that this can be sent to the members.

Meantime, by way of response and explanation to the many people who have contacted me and others asking for information, I have produced a video clip which will be posted on my Facebook page and which will include the text of this email.

Half of those members responding to this post could NOT name own CEO!!
Posted by MM at Friday, September 20, 2019