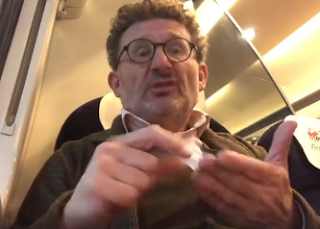 Never mind Brexit follow this!  How to ensure Deaf people know their place, a prime example of how an overbearing elitist charity is determined to show them who is boss, 7 trustees resigning, followed by gagging orders, demands for member silence, refusals to allow open debate, read it here! (We've been asked to withdraw names to protect concerned BDA members against hostile feedback if they break the secrecy demands or seen expressing concern.)

#2 Wait a minute ... move on to what? How can we support the BDA if we don't know what they intend to do? Why is there all this secrecy and can't talk about it? If you want people to support the BDA you must change policies to ones that are more popular. Einstein once said that doing the same thing over and over and expecting a different result, is madness. A change is needed.

#3 No no no it’s confidential to members only! Will be announced by BDA themselves so please be patient! If you are member, you will know - not member nothing we could do...to be honest

#2 Who do you think you are? The Mafia? It's a public charity financed by public donations. It is discrimination to exclude other deaf people.

#4  I have to agree, It's regrettable the die-hards of the BDA are still defending secrecy, the whole idea of an EGM was to make public an explanation as to why 7 trustees felt the BDA was no longer a viable option for them. 'Members Only' I find it incredible the BDA is ABLE to silence all of them and prevent anyone knowing what is going on, it's rather uncomfortable to know they have an ability to do that. What it WON'T do is encourage people to join the BDA, I envisage a mass exodus of members unless this is sorted properly. I disagree non-members have to mind their own business, (Which is what is being stated), its laudable you want to protect your BSL charity but there are bigger issues at stake here, democracy and being open just two of them. the BDA is a UK national charity and responsible to the government as well as using deaf people to gain funding, should we not have a view on what the BDA does in our name? If I join today they will gag me? I'm obliged to be offered a view, sadly his organisation the BDA has refused outright.

#2 It is especially relevant when the BDA goes to the Government and speaks on behalf of Deaf people. They are certainly not representative of anyone but the BDA.

#5  At the beginning Deaf community heard the rumours about BDA then they arranged EGM. Deaf community were relieved to hear but still worried what will the outcome be at the end of the play 26/10/2019. Now you cannot share the outcomes with Deaf Community?

#3  If I join the BDA they will take my money then tell me I cannot say anything?  Is it all funny handshakes and rolled-up trouser legs!

#4 Well charities all use these shut it approaches, say nothing, respond never, and hope it will all go away, but for a few concerned voices online that is exactly what would happen. The irony is the only thing keeping the BDA extant is they fly the flag of BSL but for that, they would have vanished years ago because of they no longer represent deaf people their membership is proof. If we read concerned comment little or NONE is being allowed by BDA members.

#2 That is exactly the point. The BDA wants the Government to think the BDA represents 100,000 Deaf people. Where are all these Deaf people hiding?

ATR:  Maybe they don't exist? Not all deaf BSL users?  we know they AREN'T members of the BDA, we are back to blurred explanations of who is deaf who isn't who is cultural who isn't, the D/d debacles, who uses BSL and who doesn't?  the BDA are masters of this distortion.   They are a cultural backwater, but for the image only THEY are promoting BSL they would have disappeared long ago.  I think deaf people need to understand what is going on in their name and not just rubber-stamp all this BDA nonsense because they fear nobody else will support sign, that's rubbish, deaf people have already voted with their feet against the BDA.  It hasn't stopped the deaf using it!  Deaf want in out of the cold.  The BDA sells only ice.
Posted by MM at Sunday, October 27, 2019