Stop making me a Beggar for rights! 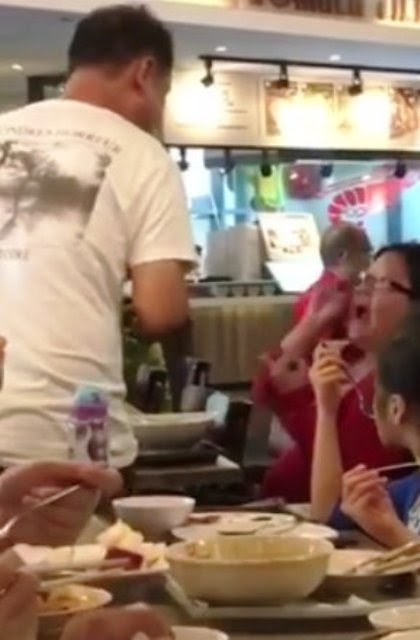 A recent comment [Many of us don't want to prove we aren't charity cases, we just want to declare it meanwhile accepting as much charity as is possible. Honestly though it wouldn't be beyond me to actually go around and collect funds (fundraising) to start a local deaf meetup, but that would at least be a valid meetup. shrug]  suggested ATRs response.

"I'm anti-charity always have been.  I believe any 'support' we have is a human right and not a handout.  The USA is very charity-minded because of their approach to 'support', but I do see in some USA areas they can be quite hostile to people that need help through no fault of their own.  The meek won't inherit the USA world.

The UK is heading that way too.  I think the ideology is different here to the USA. What we can find in the UK via funding provision to hearing loss or deafness, is opportunists taking advantage and setting themselves up as proclaimed 'experts' on what we all need, its proved very lucrative for some BSL areas who divert support funds to 'cultural'' ones that defy real description other than promoting deaf culture and self-job creation.

Other charities aren't any longer by real definition.  Especially the major ones providing a service of care or support.  They are a 'mini-NHS' in action underpinning state neglect and obligations to their most vulnerable on a shoe-string and operate as corporate areas, the day of tin rattling and well-meaning people helping out has been replaced by corporate beggars and professionals operating from the proverbial glass palaces, where mostly, actual deaf or hard of hearing aren't seen or employed except via posters and advertising etc.

If the grass root deaf used the funding given for communication support and included others that don't sign you could go with some of it.  But this isn't happening because of polarised approaches to 'support' by format.  The scandal of some deaf people setting up a charity, then gaining funding that disappears and the charity folds shortly after is a sure sign someone is seeing an opportunity to get money for nothing.  We saw £7,000 vanish this way a few years ago.  4 deaf people set up a charity to 'assess local deaf need' the warning signs should have been there immediately but weren't noted. the aim was completely vague. Of course, you need the charity status or you won't get or apply for funding.

At the initial 'launch' of that charity, they appealed for people to RUN it! after the initial 4 that set it up decided they hadn't the time to make it work. Staggering that could happen. The appeal fell on real deaf ears! and a lot walked out of the launch in disgust.  However, 2 HEARING students did offer to run it from out of the area.  Of course, the whole thing went down the pan, apart from some money being spent on a computer nothing really happened, no survey into local needs took place at all, and then it folded, the money and computer never accounted for.

Complaining to the Charity Commission for being totally stupid were ignored.  Mainly because the CC had a state 51% stake and vested interest was to support charities on a shoestring so that the state would not have to set up real support systems themselves that would be costly, a situation that still exists in the UK.  That the BSL support area is almost entirely freelance itself adds to the reality it could all go, Pete Tong, tomorrow and the deaf left with nothing they can really rely on.

Basically, it is the state refusing to honour its declaration supporting those in need.  If they did, they could zero the misappropriation of funding and kill off the sheer waste and fraud some charities are getting away with, it would also help by checking out people wanting a charity status to get funding with no real aim or ability to carry a project through.  It could also call into question as to if 'cultural funding support' is really helping those who need communication support, or just providing jobs for deaf artists who are out of the loop in mainstream art inclusion?  Logic suggests encouraging out of the loop areas, is killing their own inclusion aim.  Its the BSL tail wagging the communicational dog."
Posted by MM at Sunday, January 13, 2019 No comments: 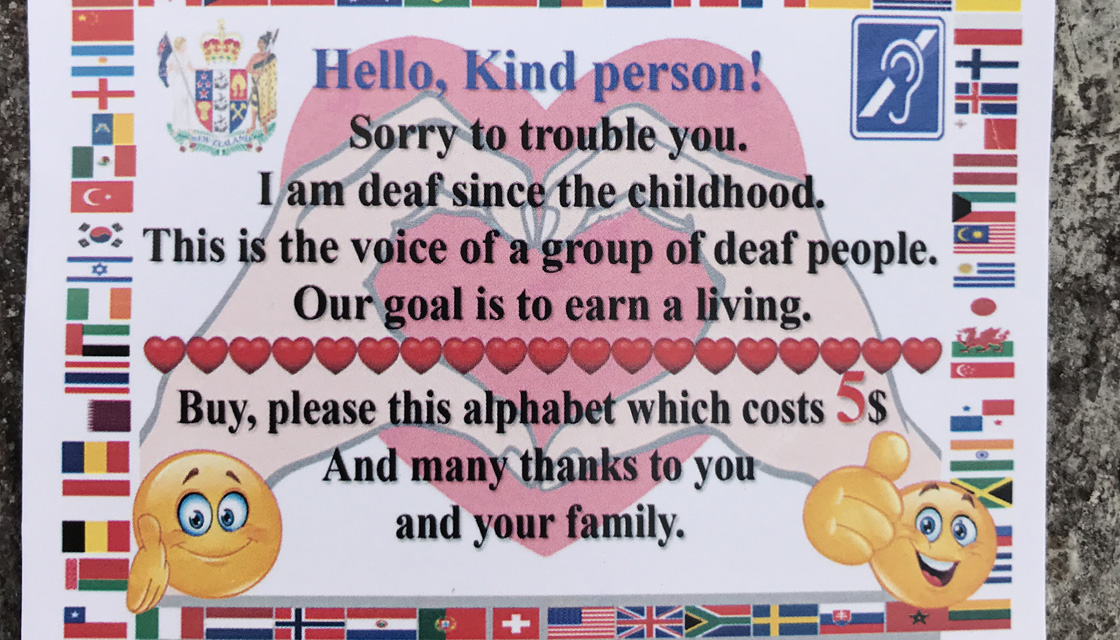 A deaf Wellington man says he's furious after a woman apparently pretending to be deaf so she could try to sell sign-language cards, came into his work. Deaf Action New Zealand has laid a complaint with police after reports of people in Wellington and Auckland trying to sell the cards for $5 each.


It says the cards, which say 'sign language in the world deaf' and have pictures of the sign language alphabet, are not being sold by people with any affiliation to any deaf organisations or clubs.  Speaking through an interpreter, Cameron Ross said one woman had come into his work, selling the cards.

He said he approached her, and it was quickly clear she did not know sign language - and that she was able to hear.  "I said: 'Look, what you're doing is illegal and completely I disagree with what you're doing', and then she just disappeared basically. "She didn't respond to me in any way except for that first interaction when she said she was deaf, because she couldn't sign at all."

It was not a good look for the deaf community, and could damage their reputation, and ability to fundraise, he said. Deaf Action's secretary Rachel Noble said a similar scam happened in the 1990s.  Then, the Inland Revenue Department thought that people collecting money were from New Zealand deaf organisations and wanted tax from that income. People were going into shops and cafes asking for money, Ms Noble said.

The UK has these people too, most of them eastern European migrants who go from pub to pub selling key rings for £3 'to help deaf people'.  ATR countered one of them with sign and the man ran out of the room.  The problem is deaf people supporting charities and begging for funding themselves, this suggests to hearing someone asking them to contribute is valid.  The answer is deaf people rejecting charity and thus making mainstream aware we aren't beggars in the first place.  If we aren't 'charity cases' prove it.
Posted by MM at Sunday, January 13, 2019 No comments: