So, you want to be an Interpreter?

They will have to learn how to make themselves accessible first!
Posted by MM at Saturday, February 09, 2019 No comments:

A device that converts iPhone screen into braille 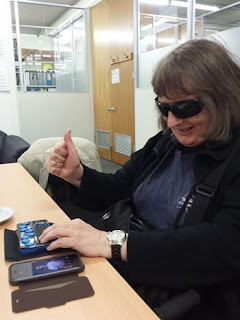 Melbourne woman Heather Lawson is both deaf and blind; to participate in an interview she requires support from two interpreters.


She places her hands over those of the first interpreter and feels via touch as he signs my questions to her. A second interpreter translates her Auslan responses back to me. But despite the multilayered conversation, this remarkable and independent woman's great sense of humour shines through. Ms Lawson was born without hearing and grew up communicating via sign language.

By the time she reached her 20s, she gradually began losing her sight as well. "It really did affect my life," she said. The small device has given Ms Lawson, and the wider deaf-blind community, the opportunity to connect with the world. In recent years a small display which fits in her handbag has become vital as it converts the words on her phone screen into braille.

"It's just fantastic, that technology, and I love it. It has made my life a lot easier and I've been able to achieve things." The braille display connects to the phone via Bluetooth, allowing her to access emails, SMS, Facebook, apps and the internet. It also makes banking and navigating public transport much easier. "I live an independent life, and I have for a number of years, but the technology that's available now has allowed me to remain independent," Ms Lawson said.

Useful in an emergency.

The machine also allows her to write notes in the phone which can be useful for communicating with taxi drivers. 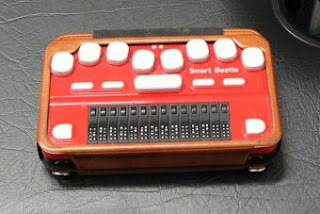 She once used it to communicate with firefighters who had broken into her home to respond to a fire alarm. "I didn't realise the firemen had broken into my house to turn it off," she said. "We were able to communicate on my computer using the braille display. "I get goosebumps just thinking about it. It was a great experience."

The device has 14 braille cells which change with the touch of a button to reflect the next passage of text.