New Gadget for Blind and Deaf.

A deaf couple gets married and hopes their future children AREN'T deaf.
Posted by MM at Sunday, February 17, 2019 No comments:

Samantha is a lovely young girl and very neighbourly. She uses sign language to communicate with the people in her community. She is very friendly and likes to engage in conversation with anybody she meets. She would be totally a different person if somebody can communicate with her. 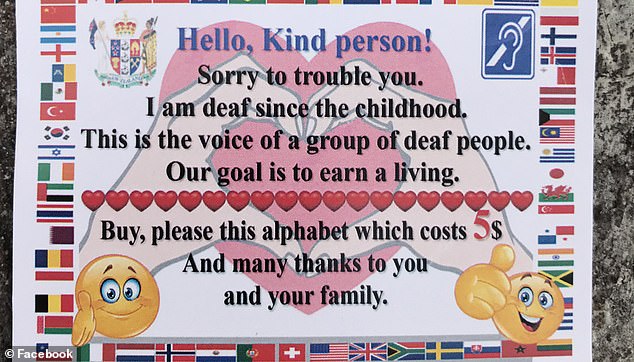 [This seems to mirror issues in the UK, where a group of eastern European people are begging on the streets on behalf of deaf people].

Please be aware deaf people don't beg, do not want anyone approaching members of the public for money, notify the police instead.  One concern is that the card is an identical card to the one used in the UK, which suggests there is a global scam going on?

An organisation for the deaf is warning kindhearted members of the public to be aware of scammers taking money for cards with the sign language alphabet on them. Con artists pretending to be deaf are frequenting businesses in Western Australia with an 'introductory card' for sign language.

Lauren Emmens was with her family in Fremantle on Saturday, January 19 when the woman approached her.  'We were sitting inside of Gino's having coffee and cake and she came in and handed three cards out explaining she was deaf,' Ms Emmens told Daily Mail Australia. As Ms Emmens knows some sign language, she signed back to the woman saying: 'My name is Lauren'. 'I found it very strange when she didn't sign anything back to me but just nodded,' she said. 'As we were all taken aback that she just handed out the cards asking for $5 a pop we scrambled to get what change we had and gave it to her.