Deaf Arts and Access to work, is it a scam?

ATR expresses concern recent increases to access to work support costs are being utilised to not advance empowerment of the deaf into wider access employment areas, but instead, being utilised to promote own cultural aspirations, and A2W is still not proving itself as a viable access medium for the deaf, and given the primary beneficiaries are in areas outside the Hearing domain and lesser being used to include the deaf outside it.

Should A2W benefits have conditions of wider inclusion attached to it?  To prove the allowance is enhancing that wider acceptance?  To ensure the Deaf embrace the access mantra of support given as it was intended?

We often wonder if spending near £60K a year to hold down a job could be put to better use frankly.  Perhaps better education and communication approaches for the deaf so they don't need so much support?   ATR spent 2/3rds of his working life with no support at all let alone paid help to assist.  Today NI gave just one group there £16,000 to promote more BSL to the deaf area, despite the huge costs in enabling its use (admitted somewhat belatedly by the DWP).  Deaf still cost the most to support.

ATR hasn't yet done a real survey but:-

(A) Who are these deaf claiming maximum A2W allowances?

(B) What 'jobs' are they actually doing?

(C) Who is making the real money?  The terps? the charities? Just the arts areas in major cities?

(D)  How far is the A2W allowance proving a real gateway to wider inclusion?

A bugbear of ATR are the  'deaf arts' luvvies, who did most of the complaining about support caps on A2W. A2W  being more about underpinning the cultural aspiration than empowering the deaf to move out into the world or learning wider necessary skills.  Less than .002% of deaf people are in that arts area.  A2W in that respect is unhelpful to most.

ATR contributing to one deaf site and pointed out a fair proportion of the site members were in the deaf arts area and claiming A2W grants, some getting the help to advise hearing to sign, and duly got banned for asking these questions.  Members there would not justify A2W in inclusive terms, despite admitting not wanting part of the hearing world or to work in it(!), as it is 'too hard for the deaf.'  So they co-exist reluctantly with 'Disabled' because the funding had those strings.  A wider query ought to ask why disabled/deaf funding was that exclusive?

You have to in it to win it holds true.  A2W in ATR's view has been about empowering deaf culture, and not empowering deaf to move out into the wider world to advance skills, it is not even mentioned in the rules about qualifying for it in terms.  It was designed to empower deaf people to manage outside own areas to progress and enjoy wider inclusion with support, the Deaf have seen this as an excuse to capitalise instead in cultural progress via the arts and maintaining own areas, enhancing their own status quo, while still is reluctant to embrace real inclusion.
Posted by MM at Friday, March 29, 2019 No comments:

At the Deaf Club..

Found at the Deaf Club (Excerpt) from Rachel Roberts on Vimeo.
Posted by MM at Friday, March 29, 2019 No comments:

Email ThisBlogThis!Share to TwitterShare to FacebookShare to Pinterest
Labels: ATR, ATR USA, listening and the deaf.


Its rather a shame the ECHR is involved as it is a disgraced organisation, that has many anti-human rights/Anti-women members. An organisation the United Kingdom wants out of via Brexit, and criticised by the USA too.
Posted by MM at Friday, March 29, 2019 No comments: 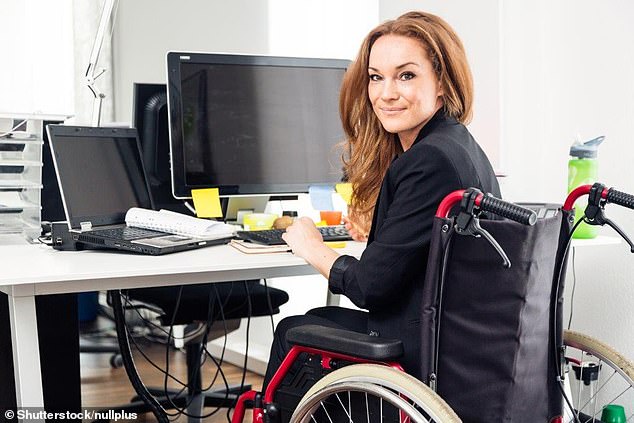 And wages, WOW!  There is a catch but can you spot it?

Million of employees with long-term health conditions and disabilities will be able to benefit from up to £59,200 a year to assist them at work, with the grant increasing next month.


From 1 April 2019, those who qualify will be able to claim up to £59,200 annually from the Government's Access to Work benefit to help pay for additional support that they may need in the workplace. Access to Work provides financial support to ensure someone's disability or health condition doesn't hold them back at work. This includes providing adjustable desks, special IT equipment and voice-recognition software. From 1 April 2019, workers can claim up to £59,200 annually from the Government to help support them in the workplace

A spokesperson for the Department for Work and Pensions said: 'Access to Work provides tailored support to thousands across the country, ensuring a disability or health condition is not a barrier to achieving someone's career aspirations. 'By extending this grant even more people can benefit from this personalised scheme, and more disabled people can thrive in the workplace.'

A spokesperson from the DWP said: 'The cap has been updated in line with the annual survey of hours and earnings published by the Office for National Statistics. 'The cap is set at two times the median gross annual earnings for full-time employees.' Disability facts and figures · There are over 11 million people with long term illnesses, impairment or disability in the UK · Impairments that affect mobility, lifting or carrying are the most common.

Prevalence of disability rises with age. Around six per cent of children are disabled compared to 16 per cent of working age adults and 45 per cent of adults over State Pension Age (66). It's claimed that now even more people will be able to benefit, especially those from the deaf community who can get British Sign Language (BSL) interpreters through the scheme.