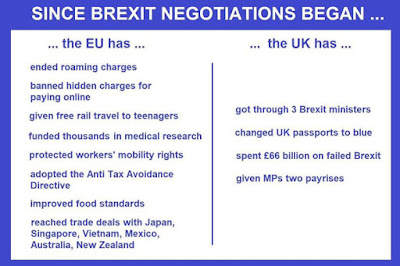 ATR saw this on social media, and the response it generated.

"The real cost of these 'advantages' is complete control from Brussels by Germany and France, so the price is too high for me.

With no borders a real threat to us all personally as well. The item suggests we get something for free, there is NO such thing. The EU has done most of this via charging the UK £Billions every year, again not exactly freebies! They have made a huge profit via trade on us too, the idea of this federalism is to asset strip member states.

Only 6 of them had the wherewithal, the rest rely on handouts. Probably those other 22 are getting the most benefit, when did the UK become a major charity financing Europe? Or sending £14.2B a year to the rest of the world, no wonder we are in permanent austerity, and most of the EU member states bordering the Med are in dire straits too.

The money we pay the EU is money stolen from our poor, our sick and our disabled, 120,000 who paid the ultimate price, they are dead, and our government, in order to feed this ravenous and greedy European beast, demonises them to justify it.  If we complain we are labelled racists, stupids, and out of our heads apparently. We MUST leave."


As a small group of students from Chatham University, we have found it important to address the issue of incorrect subtitles on online streaming platforms, which include but are not limited to Netflix and YouTube. Incorrect subtitles are a major issue, especially when talking about the deaf and hard at hearing communities.

When subtitles and captions do not portray what the actors are actually saying, people who are deaf and hard at hearing do not get the same viewing experience as those who are able to hear. To combat this major issue, we created an educational blog, which highlights the importance of catching captions when they are wrong, as well as showing YouTubers how they can edit their own captions to give everyone a fair viewing experience.

use #catchthecaption spread the word


A Dundee charity for those with hearing difficulties has helped launch three new videos which are designed to raise awareness of mental health issues among the hard of hearing. Members of Deaf Links, based at the Tayside Deaf Hub in the city centre, helped to develop the Connect Us Too clips, delivered in British Sign Language (BSL) with subtitles and voiceover.

Each clip illustrates key information from the See Me campaign – designed to put an end to mental health stigma. The charity DeafScotland claims mental health issues can be up to four times higher in deaf communities. Its chief officer Janis McDonald said: “It’s important to point out that deaf people are up to four times as likely to experience mental health issues such as depression and anxiety compared to hearing people. “I’m keen to connect deaf people together in Scotland, which is why ‘Connect Us Too’ is a vital project for everyone to work together and tackle mental health for all.”
Posted by MM at Saturday, April 13, 2019 No comments: