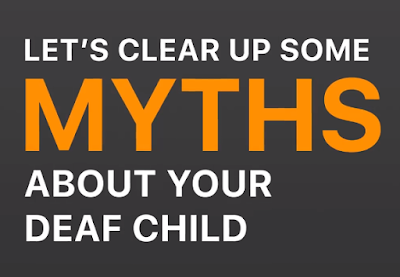 
We think the issue is more that once a child/adult uses sign be it ASL/BSL on any permanent basis then they don't want or show reluctance to access/communicate in any other form and opt out, and THAT hinders their advance since the infrastructure is not there within society to accommodate it.  Deaf awareness has failed.

Sign seduces, that's the reality, and deaf children take the easiest way forward.  Happy in that growing up to adulthood, there is back up of a kind from peers and peer groupings.  It's a naive approach to take since statistics, medical advance, and reality is going against that premise, as are aspirations of the deaf who understand you have to be there to make that difference and feel they lack the wherewithal due to language approaches.

The mainstream has to accommodate ALL languages hearing and deaf, all degrees of hearing loss and, all formats we use, sign is just one of them, so practicality suggests there must be a bigger picture seen here by the deaf in that real bilingualism is essential and not adopting the monolingual approaches and defying the realities.  If they want their culture or language to survive being dogmatic and about it is going to make for a lot of suffering for many.  Less than 2% of the deaf would be unable to adapt.  Choices and rights are a smokescreen. We have the other percentage fighting some rearguard action against progress that would help the deaf.

This isn't discrimination, it is empowering the deaf with more realistic options to manage outside their deaf bubble.  Indeed, we owe deaf children genuine bilingualism as a right and as a priority over sign initially.  ASL may well offer an 'in' to English too, but it isn't what the deaf are using after, and that is the problem, after all 'horses for courses', not one-trick ponies, as is unrealistically insisting everyone else will/must adapt to them, they cannot anyway as the reliance on sign language demands translation back up and less than  1 in 300 have it due to an acute shortage of trained people, and issues of training and costs.

Technology will eventually defeat sign reliance, it has defeated already the HoH reliances, hence the almost total lack of any Hard of Hearing access campaigns, they have embraced the technology.  Reliance on 3rd parties (People), cannot be maintained and the sheer costs of training such people cannot be met either.  It's not helped by an overwhelming reliance by deaf on untrained family support instead, 60% of deaf signers in the UK do this, killing own demand campaign points.   Demanding access they aren't using.

Deaf education/schools themselves have been decimated by inclusive policies.  There are (At least in the UK), NO schools using BSL as a primary means of education alone.  Again the educational structure isn't there to bolster culture for the deaf, it is about the effective communications deaf children need.

Many younger deaf are already getting out there, they aren't attending deaf clubs or groups either, it will be their generation dictating how the deaf child moves forward not back to the future campaigns.  Unless ALL deaf live in an area of concentration that would mean many others losing out, the want of the few outweighing the needs of the many?  The pursuit of deaf language and culture preservation has always ignored collateral damage and become elitist at that.  It is acting as a break on real advance.

The fact the FB video is promoted by people who rely on deaf using them has to be seen for what it is too.