Jazzing up your hearing aids. 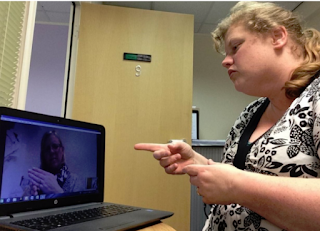 Deaf people are soon to get advice in Sign Language on fuel poverty and how to reduce energy bills after an east London charity has won a grant from Britain’s biggest electricity distributor.


The DeafPlus charity has been awarded £8,000 by UK Power Networks to train 15 advisors. Deaf people are four times more likely to be unemployed and are often on minimum wages when they do find work, according to the charity which is based in Tower Hamlets and Hackney.

“We want to ensure that fewer deaf people are faced with fuel poverty,” its chief executive Gary Williams explained. “This funding allows us to train advisors to offer energy and fuel advice in Sign language.


A bank has brought in new technology to help deaf customers after paying out £2,000 to a woman alleging disability discrimination. Fiona McKendry, aged in her 30s, contacted Northern Bank Ltd after spotting ongoing fraudulent activity on her account.


The Belfast woman, who is profoundly deaf and wears hearing aids in both ears, wanted her brother to relay the instructions of the bank employee to her, intending to respond via the speaker phone.

The bank blocked the card immediately after her phone call but following her experience she contacted her bank via secure messaging on the online banking app. The app says it can take three to five days or more to get a response. Ms McKendry was concerned that the app would be inadequate to deal with her urgent situation. The next morning, she was invited to meet the branch manager who confirmed her account was safe and missing funds would be reinstated.