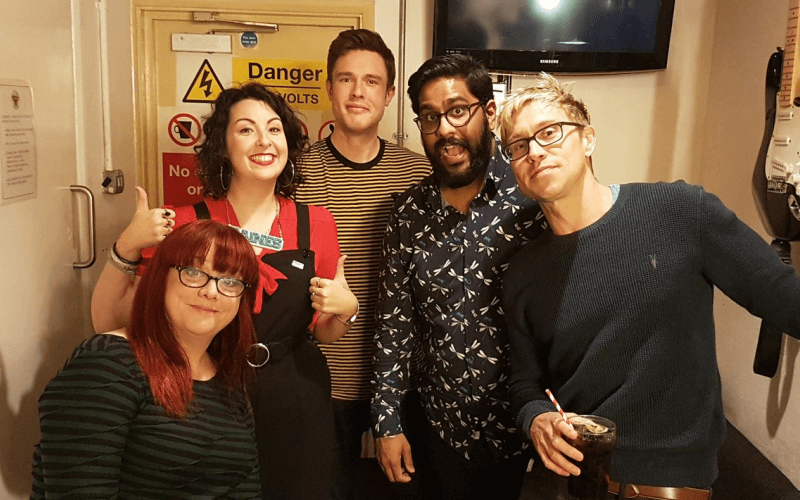 Oops!  A disability charity has refused to apologise for holding a fundraising comedy night in an inaccessible London venue. Action on Hearing Loss (formerly known as RNID) was raising money as part of its Deaf Awareness Week with an evening of stand-up at The Comedy Store in London.


Performers included Angela Barnes, Samantha Baines, Ed Gamble, Eshaan Akbar, Russell Howard, and John Bishop, three of whom have hearing loss themselves. But the venue chosen by the charity is not accessible to many disabled people, with The Comedy Store warning on its website that it only has a “chair lift” which “cannot bear the weight of a person in a wheelchair”. This means that any wheelchair-user “must be able to leave their wheelchair, descend via the chairlift, then retake their wheelchair once at the bottom of the stairs”, so “large electric wheelchairs are unable to gain access” to the auditorium. Alan Benson, a disabled campaigner and activist from London, said: “Funding is a challenge for everyone so events like this are very important, but it’s vital that we get them right.

“In a society that routinely discriminates against disabled people, we must make sure that we support each other and run fully inclusive events. “I know that those with hearing impairments routinely face barriers to participation so I would have hoped for better.” Benson, who uses an electric wheelchair himself, added: “London has many great accessible venues so there is no excuse not to use them. “By using venues like The Comedy Store, we validate their inadequate provision. “To justify the event by saying it was accessible to some disabled people is simply not good enough.”

Awareness, just not as we know it? 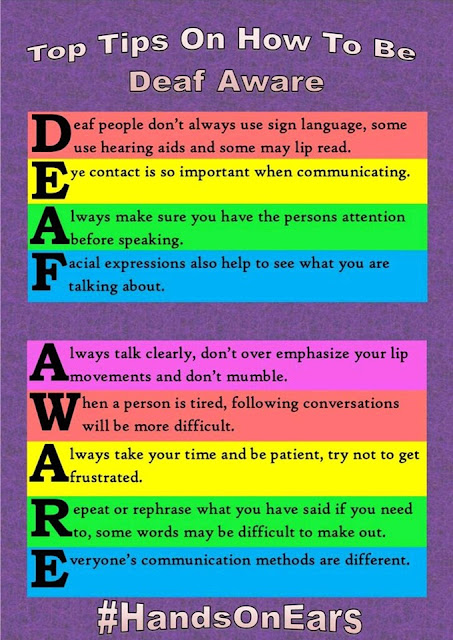 The one above ATR found most welcome, albeit suggested that advice better suited for the 19070s rather than the new Millenium where so much access and assisted formats have zeroed much of the advice noted above.  ANn immediate turn off with 'Deaf Awareness' as a heading.

There were other queries as to why HoH areas are even included in these 'Deaf weeks' which are predominately a potted version of the atypical cultural fest more than an awareness for the 10m with hearing loss, who are notable by their complete absence and non involvement in deaf weeks deterred it seems by them being fronted by people signing in BSL a minority, and plugged for all its worth by the charities and areas upporting them.

But, a minority who use the statistical base of the majority to push that message.  An issue of contention in the UK HoH world, who complain these cultural approaches have undermined their support systems and confused the system as to who is deaf and who isn't, as well as who is a cultural member and who isn't, mostly fed by the relentless plugs about the 'D' and 'd' Identities nobody but cultural deaf recognise in the hearing loss areas.  Sadly, the apathy of the silent 10m means no-one challenges it.  It isn't helped by the alternative 'Weeks' we see, some supported by disability areas and some by the cultural deaf themselves who have two conflicting weeks one the general awareness of sign use, the other a cultural view of it. I gather the BDA has a purist version too.

Of course none relevant to the 10m others who long since adopted technology as their primary format and assist, text is their King.  Thus viewing the stat advice that includes BSL as puzzlement and lacking relevance.  'Deaf' also insist the awareness weeks are about them, not about anyone else.  HoH and the 10m tend to agree, the only annoyance being the 'global' identity these deaf are applying to everyone else.  Maybe minority awareness, and maybe awareness written by these deaf  NOT us, as once sign is used it no longer applies to anyone else.

There are two primary areas, time for two different weeks?  Technology is our bag, not the hands.
Posted by MM at Thursday, May 09, 2019 No comments: