Aren't you Glad Deaf awareness week is nearly over?

Deaf Awareness Week: 'You don't look deaf...' (thought I'd put a pretty face on knowing how the image is all, and nobody would care if she signed or not anyway).


I know I don't look deaf,  (Not even to other deaf at times),  with a face like mine nobody would ask, or expect I was anyway, (The poor impression of a nodding dog tends to be a real giveaway as NOBODY relates to everything), and since none of deaf week relates to the majority of deaf people or the those with hearing loss at all mostly, I'm always glad when the charade finishes.

No I don't look deaf,  so how can I tell people off who aren't aware I am?  Do I carry a label on my back? a card to explain? a tattoo 'I am deaf'on my forehead? or maybe throw a few signs out so they get an idea? (Not that it helps if they don't know any but...).   The fact 'gasp' I can speak OK just ends to get me accused of being a fake more than anything from the Deaf and from the Hearing.

Identifying the invisible has always been an issue by default, but so has the extreme reluctance of those with an issue you cannot see to self-identify either.  All part of my right, my culture etc...  Or hoping the will go away and cease stressing you out.  A quick perusal of deaf week plugs threw up a lot of telling statistics e.g. 63% was about deaf language and culture.  There was only 15% relating to alternative formats and options to that, the rest people plugging support and advice services for a nominal fee.

Supporting the deaf doesn't come cheap.  Supporting the rest isn't an issue we can't sell that support.
Posted by MM at Saturday, May 11, 2019 No comments: 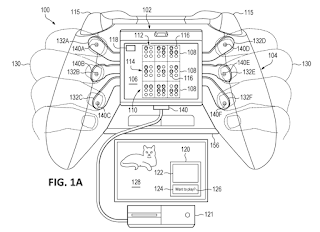 Microsoft  has been leaning into accessibility in gaming lately, most visibly with its amazing Adaptive Controller, and a new patent suggests another way the company may be accommodating disabled gamers: an Xbox controller with a built-in Braille display.

As you might expect, it’s already quite hard for a visually impaired gamer to play some games, and although that difficulty can’t be entirely alleviated, there are definitely things worth doing. For instance: the text on screen that sighted people take for granted, documenting player status, items, onscreen dialog or directions — how could these be read by a low-vision gamer who might be able to otherwise navigate the game world?

In many circumstances, a screen reader is what a visually impaired person would use to interact with this kind of data, but often that text is relayed to them in audio form, which is far less appealing an option when you’re in-game. Who wants to have a computer voice reading off your armour levels and inventory burden while you’re trying to take in the ambient environment? 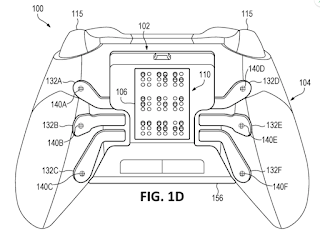 There are already some Braille display accessories for this kind of thing, but there’s nothing like having support direct from your console’s designer, and that’s what Microsoft has demonstrated with its patent for a Braille-enabled controller.

The patent was filed last year and just recently became public, and was soon spotted by German tech site Let’s Go Digital; there have been no official announcements, though the timing is favourable for an E3 reveal. That said, patents don’t necessarily represent real products in development, though in this case I think it’s worth highlighting regardless.

The Braille Controller, as it’s referred to in the patent, is very much like an ordinary Xbox One gamepad, except on the back there appears to be a sort of robotic insect sticking out of it. This is the Braille display, consisting of both a dot matrix that mechanically reproduces the bumps which players can run their fingers over, and a set of swappable paddles allowing for both input and output.