Hearing aids that can read your brain. 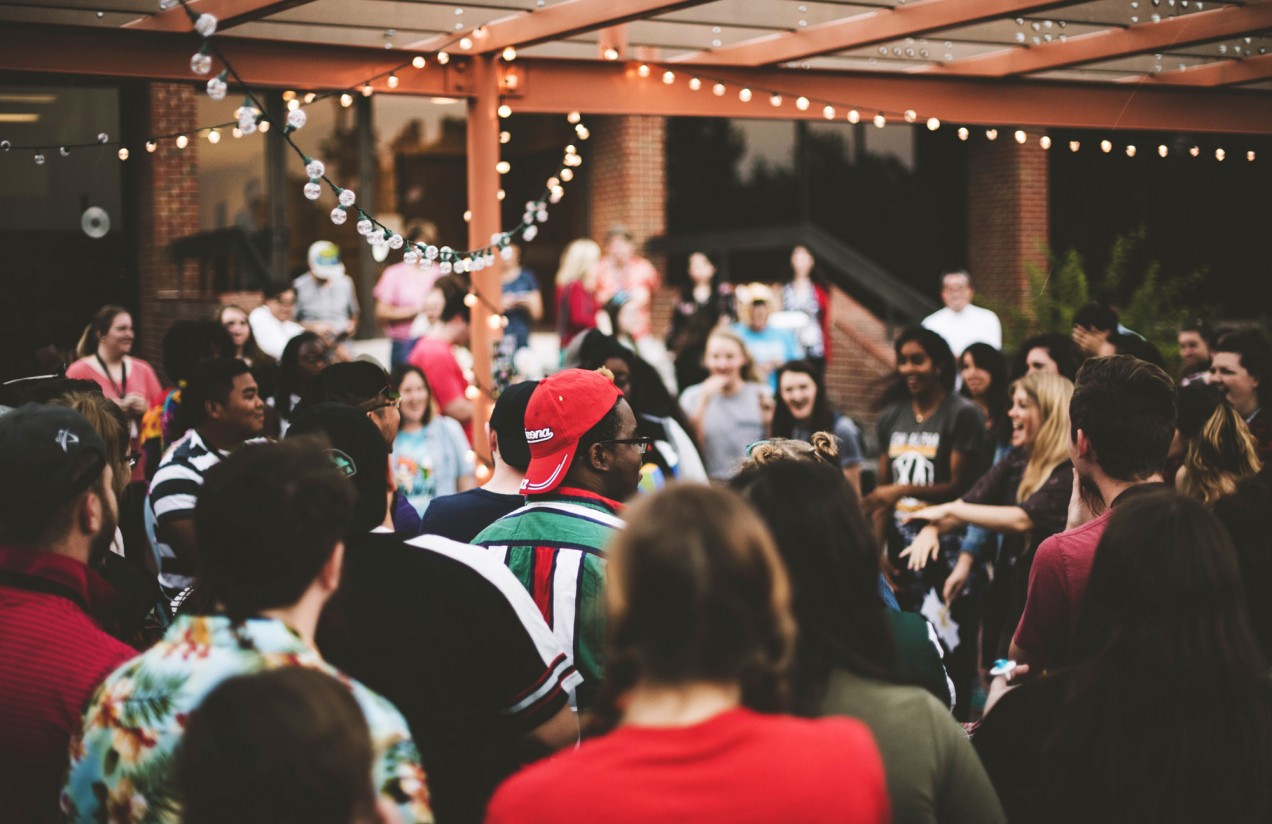 But, can they clarify what you hear lol.    Hearing aids that read your brain will know who you want to hear If you have difficulty hearing, it can be tricky to make out a single speaker in a noisy room. A system that amplifies the voice you want to listen to could help.


Imagine you’re trying to have a catch-up with your best friend in the middle of a noisy pub. Despite the distracting background noise, you are able to filter out the hubbub and can still hear all your friend’s best gossip. This so-called “cocktail-party effect” comes naturally to many of us, but for people who use hearing aids, coping with irrelevant noises is difficult and deeply frustrating. A potentially transformative new system, however, can work out who you want to listen to and amplify that voice.

To understand the listener’s intention, it uses electrodes placed on the auditory cortex, the section of the brain (just inside the ear) that processes sounds. As the brain focuses on each voice, it generates a telltale electrical signature for each speaker. A deep-learning algorithm that was trained to differentiate between different voices looks for the closest match between this signature and that of the various speakers in the room. It then amplifies the voice that matches best, helping the listener focus on the desired one.

The system, described in Science Advances, and created by a team led by researchers at Columbia University, was tested on three people without hearing loss who were undergoing surgery at North Shore University Hospital in New York. They had electrodes implanted as part of their treatment for epilepsy, meaning their brain signals could be monitored. The participants were played a tape of four different people speaking continuously. The researchers intermittently paused the recording and asked the subjects to repeat the last sentence before the pause, to ensure they were hearing it correctly. They were able to do so with an average accuracy of 91%.

There’s one obvious drawback: the current system involves brain surgery to implant the electrodes. However, the researchers say brain waves could be measured using sensors placed in or over the ear, meaning the system could eventually be embedded into a hearing aid (although this would be less accurate). It could also be used by people without hearing loss who want to boost their ability to focus on one voice. Another difficulty is the time lag.

It’s just a few seconds, but it could mean missing the start of someone’s sentence, says Nima Mesgarani, at Columbia University’s Neural Acoustic Processing Lab, who coauthored the paper. There’s an inherent tension between accuracy and speed at zeroing in on a specific speaker, he says—in other words, the longer the system has to listen, the more accurate it is. This issue requires further research to solve, but he says this sort of device could be commercially available in just five years. This study is just a proof of concept, but it shows exciting potential, says Behtash Babadi, at the University of Maryland’s Department of Electrical and Computer Engineering, who was not involved in the research. “Within just a few seconds, someone using a device like this could silence everyone but the person they want to hear,” he says. “This work is the first to really solve this problem, and it’s a leap toward making this solution a reality."

They Work for us?

They work for some but it isn't us.   A recent debate in Parliament discussing deaf week noted no health system had published anything much about it or the access they do or do not provide for those with hearing loss.

As usual, huge disinformation provided by the BDA and others was rife and the complete manipulation of statistics to include people who were neither deaf or sign using was pretty blatant.

The Labour MP Catherine McKinnell suggested there was little or no access for the BSL using deaf which was completely wrong, as the NHS recognises ONLY sign using deaf, there are no records available to suggest they have any system to provide for non-signing deaf or the Hard of Hearing.  Perhaps she didn't have her aid on.   E.G. Wales has 47 BSL interpreters providing regular daily access to the NHS, Deafened and HoH have no support workers, if they haven't family there is nothing.  We bought mobile phones, I suggest the deaf get some.

Claims of 150,000 BSL using people and even 85,000 daily BSL users has no basis in statistical fact. It's a distortion of the 'deaf' aspect, i.e. people who have profound hearing LOSS, not BSL using deaf.   Nobody knows how many rely on BSL even amidst deaf people,  the last census stated 15,000 stated they knew BSL, but, knowing sign and daily reliance and usage are a different thing altogether.

The BDA counted family hearing members, BSL learners, hearing support workers (Yep the deaf have them and mentors and..).  Whilst the EU published a list acknowledging visual 'languages' in 1988 and again 1995 and again in 2005, there was little legality attached to it in law and in UK education still isn't because choice has made it almost impossible to run a tiered system set up, it would also create an imbalance of supportive education.  Mainly because deaf schools are closing down.  There was a lot of hysterical nonsense regarding Linguistic rights, norms, etiquette, (Everything but communication effectiveness), but little or no statistics on BSL usage and effectiveness regarding re-translating to hearing people.

The BDA is always about culture and linguistic hoo-ha, it was never about clarifying the language or the grammar issues sign use presents, having said that the support IS there for them, we would all like to know how much is actually taken up?  As the alleged 87,000 reliant BSL deaf (and 70,000 randoms), have never used them if they had demand would have made access no issue.  The MP was reminded of the factual implications of the EU 'directive' on signed languages, in that implementing them all on a legal basis was not binding but down to individual providers and needs.  It was the BDA who declared Europe had made BSL a law of some kind because they hadn't read the EU 'small print'  or understood they had no power to force the UK to comply.

Much was talked about BSL, in fact ALL the talk was about BSL and deaf week, but the BDA had to use the numerical fact of non-deaf to bolster their claims of lack of support, which was grossly unfair to non signers, and they couldn't valid own BSL numbers either, it's all guesswork and since nobody keeps accurate records other than clinical, there is little way to challenge the BDA's claims either.  In reality,  the deafened and the Hard of Hearing would stand to gain nothing at all from any Improvement in BSL access.  The D/d thing distorts everything and parliament keeps getting confused who they are actually talking about.  Access to education, to Health or to essential emergency services for non-signers is mythical, since, if you don't sign that's you out.  What is 'deaf week' about?  Most deaf had no idea it was happening.

The deaf social area shortcomings, we read the MP attach blame and preach the BDA mantra of 'Hearing are to blame' when, there are no stats to back up deaf attempting to bridge divides, there is some fatalistic attitude 'Hearing don't sign so what else can we do?'  It's a bluff, its defeatist if it isn't, its a con act.  all their campaigns are to consolidate where they are.  Providing deaf counselling is costly because people like the BDA claim they need specialist BSL and culturally aware staff and one on one assessment, but the deaf use GP's with a terp daily and think nothing about it, you're confused?  Join the club.  So seeing a consultant demands a different approach?

The BDA demands culturally aware clinicians to assess them, and because people like the BDA re urging deaf to refuse using their own  BSL terps to access local areas.  What happens then is deaf and their issues 'deported' out of the area, and in mental health that can mean they often cannot return either, set apart from family, and friends.

There were claims they had to ask the family to make calls to arrange appointments etc, but, HoH have had to do this since day one.  The reality is most deaf 63% prefer to ask the family to make those calls rather than take the responsibility to make them themselves.  Near all Health and emergency areas have text access, and all deaf use text so why aren't they phoning?  There is even a BSL relay system they can use, again WHY aren't these deaf using the provision already there?   Because the BDA says they have a right to BSL only access? It's there.

All GP's are obliged to provide access, all they have to do is ASK.  They prefer to complain instead.    The MP shows a glaring lack of access availability, no doubt spoon-fed by the BDA and others it isn't there, has she even asked the NHS?  The counter Charity the AOHL the UK's largest hearing loss charity with 10 times more members than the BDA (And provided the specialist BSL care the BDA doesn't!), regularly recognises NHS access areas and is currently running their latest list of potential award winners for.... proving access and support to deaf and others.  Quit the hype and stop using ignorant MPs as stoolies for culture.

You have been outed time to play fair.

Deaf Awareness Week (For those who didn't know).


The whole week seems to be complete postcode-driven lottery by all accounts, with vast areas of the UK deaf and HoH,  being totally unaware it was happening.  Do they not understand deaf awareness has failed to advance our access for the last 15 years?  It's just charity PR mostly with the obligatory signer front of house.
Posted by MM at Thursday, May 16, 2019 No comments: