Roger, over and out. 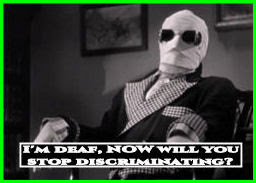 Can't help feeling the whole awareness gigs by the deaf and the disabled are at odds with each other.  Discriminating at some individual or group with an 'obvious' disablement seems pretty simple to ID and address in real terms, as averse to those who discriminate against people whose issue is IN-visible (those with mental health issues, or the deaf etc).


All discrimination is poor but, how do you highlight an issue you cannot see?  Or in the case where that disabled person doesn't want to be accepted AS a disabled person?  There are areas like the deaf, the blind, even Autistics, who feel their 'issue' is their NORM and not a disablement, what then?  Is it discrimination regarding an issue THEY don't recognise?  It isn't disability discrimination is it?  So can it be pursued under the Anti-Disability Acts or Laws?  The primary issue is people feel the human rights law is more effective a tool than equality or anti-discrimination laws are.

A significant culture shift, driven by leadership teams, is needed to tackle the bullying and exclusion that many people with visible differences experience at work. Almost a fifth (18%) of people across the UK identify as having a visible difference – such as a mark, scar or a medical condition that affects their appearance – and more than a third (36%) had experienced hostile behaviour because of this, according to campaign group Changing Faces.

Discrimination How to use anti-discrimination policies more successfully Police forces should ‘positively discriminate’ to boost diversity At least 1.3 million people in the UK are estimated to have significant disfigurements, including 569,000 with facial disfigurements. Much of the discrimination they faced was in the workplace: 36% said they had been discriminated against when applying for a job because of the way they look; 40% felt they were judged by potential employers and 41% had not applied to certain roles because of their appearance. The problem is not limited to recruitment: 64% experienced hostile behaviour at work; 19% have felt uncomfortable around colleagues or have received negative comments; and 10% have been ignored by their co-workers.

Despite the Equality Act 2010 offering workers protections against discrimination, many people felt their employer had not been effective enough in preventing it from happening (34%), while 40% said the law did not offer them enough protections at work.