BREXIT UK... Why we must leave.

A new Prime Minister and a new hope? 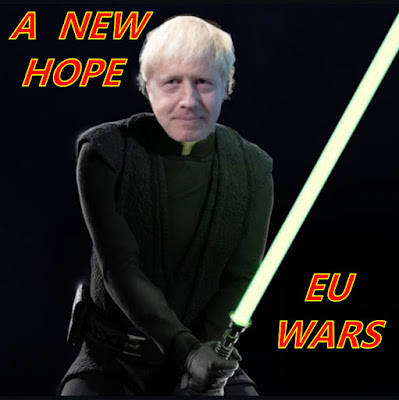 Why a new referendum or 'people's vote' is pointless, they are both viewed as trying to overturn an already made majority and democratic decision. For those of us around when the decision to join was made, we were not given real background or details on that, but there was no move made then to challenge, even when the decision to join was based on us just joining SIX other countries.

Since then 22 others have joined the bandwagon despite no consultations to the UK agreeing to it, because the idea was for the 6 'richest' countries to hand them freebies to join. The USA was, and still IS, forking out billions of $$$s because they cannot be bothered to even defend themselves.  The UK sends them £14B a year so they can continue ripping us off and render our own government pointless too, in case we said enough was enough, now, we ARE saying that's it.

Of those 22 federal 'states' of the EU, 21 are still standing there with hands out or have been bankrupted and held to ransom by Germany and France, Ask Greece, the eastern bloc who joined, or Spain etc... how much they have 'gained' from it all?

Even as we went for a new PM the EU negotiation team were ignored in favour of Merkle and Mini-me, and a blatant brown-envelope was being passed around to ensure the new EU boss does what Germany/France tells them to do, despite 5 member states trying to block it happening, clear proof if any was needed, who calls the real shots in Europe.

In essence, the UK CANNOT afford to now remain and still be Britain, it would be a satellite of the EU and milked to bankruptcy the same as Greece was. The 4 major 'tenets' and red lines of the EU are stacked against the UK, against democracy, and a danger to us all, we have no other option but to ditch those to protect our borders and security.

The USA also stated the UN was dead, the Human Rights set up corrupt, and Europe was too close to Russia for anyone's well-being, being as it is, reliant to a huge 40% on Russian oil and gas.  The EU also allowed China to flood Europe with cheap steel imports designed to decimate European and British competition, by selling it well below the cost of its manufacture.

The EU has lost control over its own security and put us at risk as a result, by not erecting or protecting IT'S own borders. Then allowed dubious and well-meaning people to ferry in illegal immigrants actively aiding and abetting illegal immigration and assisting people smugglers, and then hand them free visas as 'Europeans' enabling them to go where they wanted.  The result? IS, AL Queda, and every other loony, racist and murdering terror group gets a EU welcome mat... worse genuine asylum seekers dumped in their favour...

Brexit isn't about racism or abuse it is about common sense and reality of this European 'free for all' that puts the UK and the western world at huge risk.  We MUST leave Europe on October 31st or face the demise of Britain.
Posted by MM at Wednesday, July 24, 2019 No comments:

Why a deaf oral education is superior to any sign-based one. (So why wasn't this presented to parliament when the BSL people lobbied parliament for deaf education access?).  Here, is visible proof our deaf children CAN speak and manage without sign language.  And its the top deaf school in the UK too.  There are alternatives, the activists just don't want your deaf children to have them.
Posted by MM at Wednesday, July 24, 2019 No comments:

Our future via technology...

A charity which looked after the needs of hundreds of people with hearing difficulties went under after a fall-out with benefit bosses, it has emerged. East Lancashire Deaf Society (ELDS), in Heaton Street, Blackburn, was placed into administration last month, forcing 76 staff out of work.

But the Telegraph can now reveal the beginning of the end for the 142-year-old charity came when the Department of Work and Pensions (DWP) is said to have withheld payments due to one of their offshoots, Signs Communication NW, under their Access to Work scheme last November.

Administrators have put the outstanding figure at £286,521 after examining ELDS’ own accounting systems. But directors, who include former Royal National Institute for the Deaf chairman Doug Alker, say the accounts were not up-to-date and the total is closer to £400,000. Loans of £975,000 plus are owed to the Charity Bank Ltd and £567,488 is held as a fixed charge over their Kings Court offices by Christopher Holgate, a former Barnfield director. If the building is eventually sold then one or both of the parties may benefit.

Their offices in Heaton Street, and Burnley’s Keirby Walk and Cannon Street, in Preston, were leasehold. But staff have been informed any outstanding wages, holiday pay or pension contributions, said to total £71,563 between them, are not expected to be recovered. Joint administrator Megan Singleton, in a report just filed with Companies House, said the company fell into arrears when the DWP withheld funds last November. “As such, the company was unable to pay expenses such as staff salaries,” she added. ELDS directors sought advice from the Charity Bank (CBL) and an initial approach was made to administrators Leonard Curtis. In the interim, a £100,000 loan was secured from CBL but arrears built up and the administrators were called in again.

An unsuccessful effort was made to market ELDS and related services, like interpreting firm Sign Communications NW, Sound Solutions, Kings Nursery and the Parthenon Greek restaurant before the insolvency was finalised. The administrators have stressed Kings Court, which has 16 tenants, has continued to trade during the insolvency process.

A DWP spokesman confirmed their Access to Work contract was with Sign Communications NW. She added: “The support for ELDS staff was delivered by Signs Communications North West and we are currently reviewing that relationship.”