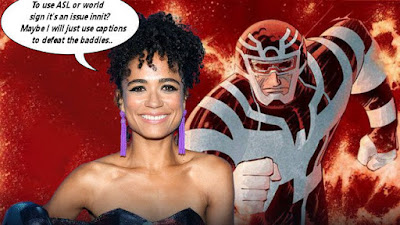 I don’t want Marvel to make a big deal of Makkari’s deafness or to highlight one mode or another as being 'right' or 'wrong'.  I just think current obsessions in how minority areas are represented just marginalises them more or projects a stereotype nobody will agree with anyway.  Mainstream is damned if it does, damned if it doesn't.   All this hand-wringing (No pun intended), and hair-pulling (No offence meant to baldies),  about who or how we are portrayed.

It's buying into the whole hype thing anyway by vested interest to plug their particular version.  A signer won't be representative of the deaf and a lip-reader opposed by sign dependents.  You can only hope she speaks in caption bubbles instead...  I think inclusion is going to be a bugger...

It’s not only the amount of deaf representation in the media which can be an issue but also how the condition is portrayed  Marvel’s Cinematic Universe of superheroes just got a lot more human.

In a series of announcements at this year’s San Diego Comic Con, the movie studio unveiled its first Asian-led film, LGBTQ+ heroine and deaf superhero – the latter played by The Walking Dead star Lauren Ridloff. Ridloff’s upcoming portrayal of Makkari in The Eternals – scheduled for release in November 2020 – offers up a brand new backstory for the character.

The decision, albeit long overdue, places a talented deaf actress in the spotlight when all eyes are on Marvel after its record-breaking epic, Avengers: Endgame. Much like young girls are now looking up to Captain Marvel, deaf children and young people now have Makkari, at a time when deaf role models in film and television continue to be few and far between.

Something incredibly ordinary could be seen as unnecessarily superhuman. All of this could sound endearing and as a charming celebration of disability, but aspects of deaf culture have already been met with over-the-top fascination. Lipreading and British Sign Language are still seen as gimmicks and party tricks by some people, and some members of the community still have to deal with the occasional backhanded compliment – ‘you speak well for a deaf person’ being one of them. We need the mainstream media to display deafness with honesty and humanity, and as weird as it sounds, a Marvel superhero film may be the answer.