That was the BDA that was... 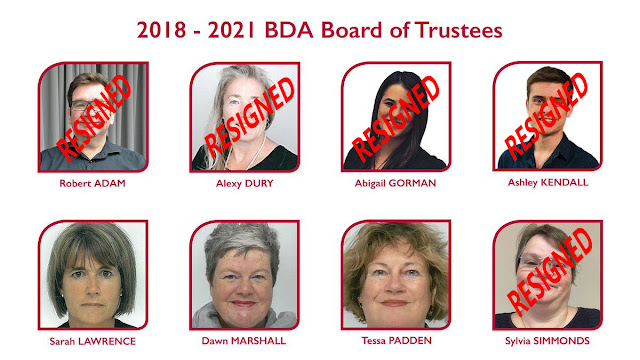 Who next to follow the 5 ?  As the deaf criticise the UK's oldest dedicated 'BSL Deaf' charity as being secretive, refusing to include and unforthcoming about its finances or direction, leaving a hearing terp and a few not completely with what is going on anymore to fly the flag..  E.G.

THIS is a place where DEAF can simply be. To not have to justify our self to deafened, hard of hearing etc, some; of whom, think THEY know better.

ATR:  Is inclusion NO part of the BDA's remit?  We know listening to others isn't.  E.G. Allowing comments like these and not clarifying or challenging them?  It seems the BDA bases itself on some 'glorious' past when deaf schools dominated, Mr Epee did a few signs, and Milan was all the history it ever had,  and all deaf attended deaf schools/clubs of course.  A set up, that hasn't been true for over 30 years.   The BDA criticised for not answering 'concerns' by deaf sign purists of too much 'CI inclusion' and too many hearing making money at the deaf expense (Mainly to ensure 'jobs for the boys' we assume).  The BDA was forced to include CI users or face opposition from other deaf or face charges they were discriminating.  The reality is they needed CI members to stay afloat and claim funding too.

Wales e.g. hasn't a single deaf school and less than 20 exist in the entire UK, clubs have diminished by 76% these are facts, just what IS the 'aim' of the BDA now? to hold on by tagging on to WFD things and enjoy the trips kudos it offers, via a lack of signed translations and captioned access too? The WFD is primarily unknown to most UK deaf and inaccessible to them. It's an avenue for deaf profile people to get free junkets to obscure European areas no-one cares about.  Perhaps they are unaware a lot of that is going to go if/when the UK leaves the EU!

The recent resignations by no less than 5 BDA trustees this year all young, forward-looking and vibrant deaf confirm the view the BDA is well past its sell-by date and, out of touch WITH deaf people.  Some comments posted on the BDA social media site are a bit silly frankly insisting it is 'US against the World' including it seems 'US against other deaf/deafened/HoH/hearing too if the above comment and others is anything to go by..'   To protect what exactly?

There is sadly a strong paranoid and hard-line deaf area pursuing some sort of 'purist' cultural approach, mostly online, no doubt hoping the current cultural gig will spur it all on.     It was rather sad the latest trustee resignation was on the grounds deaf were not paranoid enough, as trustees clashed with the governing body over 'lack of 'Deaf' emphasis'.  They should be aware the BDA governors need their beauty sleep... they are getting on after all.

The BDA should call it a day, and accept times and the deaf have changed.  We are forever reading from them ludicrous and unfounded claims of who deaf are, how many exist too, anything from 15K to 150K is being mooted,  10m if funding is being claimed.... and the 'all deaf sign' thing rambles on and on to everyone's annoyance, FAKE news being the only news the BDA puts out, it has lost credibility as a result.

If the BDA want to address deaf issues it could examine online output by a plethora of UK 'closed' deaf groups masquerading as a 'safe space' but intent on bullying or banning, anyone who disagrees with whatever rambling deaf mantra is vogue at present, they could start by disassociating themselves from such groups and comments not playing Pontious Pilate and declaring it is free speech.  The deaf need to get their own house in order. The deaf image is being tarnished by these people.  When the 'Fed' started up years ago these deaf utilised the entire resources of the BDA in an attempt to bring it down from within.  Such members of that group run many online deaf sites today still undermining progress.  They make a virtue out of deaf isolation.

BSL interpreters need a flea in their ears too, insisting to systems the deaf do not WANT/NEED captions or subtitling but 'prefer' to ignore non-signing deaf in access.  (No doubt to ensure the work keeps coming in for them), it's completely cynical utilising the culture thing to back up what is job-creation for themselves.  They wonder why the BDA membership is in negative figures, and the AOHL running away with 35,000 plus... even after ditching the only signing CEO it ever had because he could not see any further than his own hands.

Should the BDA be concerned, the charity commission is now looking into its affairs? or note that governors of another leading BSL charity caused the closure of their BSL support areas by pursuing their dogma instead of proper governance? losing many deaf their jobs.

The overall view is that 'Trustees' are no more than a projected 'image' of deaf people who hopefully could help them raise more funding, but who should, be seen but not heard, backfired, hasn't it?  The cheeky buggers wanted a voice too, (Whatever next!).  What the BDA could do, is to use the resignations to justify the fact some of these people wanted to hinder inclusion and wanted to marginalise the deaf again, by encouraging restrictive practice, it would make the BDA look a lot more positive than just sitting back doing nil hoping it all goes away.  It would be more truthful too.

ATR is available if wanted...