A BSL video by a BSL representative uncaptioned and about Hard of Hearing clubs.  Why don't Gloucester use actual HoH people? given most do not sign at all, let alone watch BSL video output and use clubs for quite different reasons to deaf people?  It looks like and is a promo for deaf BSL people.  Let the hard of hearing do own adverts, please.  Such imaging distorts the need and supports message.
Posted by MM at Saturday, August 10, 2019 No comments:

Mexican director Alfonso Cuarón’s masterpiece Roma was greeted with critical acclaim and three Oscars at the 2019 Academy Awards. But, even as Cuarón was basking in the spotlight, he was outraged at the way Netflix had decided to subtitle the film for Spaniards.


The movie was shot using Mexican Spanish and Mixtec, a language spoken by about half a million people in the Mexican states of Oaxaca, Puebla and Guerrero, and in California in the USA. Netflix decided to give the Mexican Spanish and Mixtec dialogue subtitles in Iberian Spanish for its audience in Spain. Cuarón considered this decision to be “parochial, ignorant and offensive to Spaniards themselves”. According to him, the Spanish audience was capable of connecting with the film without subtitles.

As Mexican author Jordi Soler told the New York Times: It’s like if you have an American film showing in the UK and the character says he’s going to the washroom, but the subtitles say he’s going to the loo. It’s ridiculous. They’re treating the people of Spain like they’re idiots. Reactions from viewers, writers and translators on social media denounced Netflix’s decision as paternalistic and highlighted its colonial connotations. The media, both in English and Spanish followed the discussion closely. Ultimately, Netflix removed the subtitles. The world used to be divided between those countries using subtitles (including, in Europe, the Scandinavian countries, Portugal, Greece), and those opting for dubbed versions (France, Italy, Spain, Germany).

In Latin America, it tended to be the medium that dictated the type of translation: subtitles were popular at the cinema and on cable TV, while dubbed versions reigned on public and free-to-air television. These days the situation tends to be more fluid. My research has shown that even in countries that have traditionally dubbed movies, some viewers prefer subtitles. Subtitles are faster to produce than dubbed versions – and users claim they give a viewing experience that is closer to the original because they maintain the original actors’ voices. The function of subtitles is also changing, depending on where you are. In the UK, for example, subtitles have traditionally been aimed at deaf and hard of hearing viewers and viewers of foreign language cinema.

But subtitles are now also becoming popular among the wider TV audience. Subtitles are being used by viewers as a way to stay focused on the content and to watch videos on their smartphones and tablets while commuting or in busy or loud places. Viewers also use subtitles to improve their language skills, as my research on the use of subtitles in Netflix’s House of Cards has shown.

Netflix’s Narcos was shot in both Spanish and English which was seen as a clever move for a distributor looking to expand its audience into lucrative new markets. 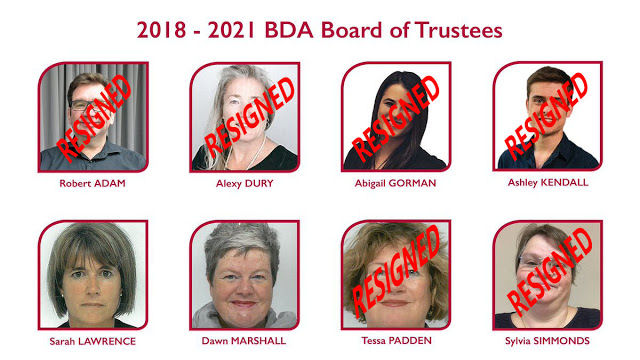 ATR asked Who next?  Now we know, it's Tessa Padden.  Chaos as calls for an EGM to get answers as to why trustees are all resigning, but are getting ignored by the BDA governance.

A petition is circulating demanding an EGM with a 'warning' not to put names on it for fear of being bullied, with one ex trustee suggesting fellow BDA members will turn on each other if known to be critical of the BDA running, blocking names,  but BDA will demand proof of membership.  The trustee running the petition is advising members of the exact 'English' wording to use via social media, as the BDA social site is blocking questions.

It's a pretty determined attempt to prevent criticism being aired or issues being debated, clearly, members should be seen, pay their dues, toe the established lines, but otherwise not question decisions made.  What happened to this 'bastion' of the UK cultural ideal?   A number of resigning trustees are suggesting bullying from within the BDA itself.  Social media posts are muted and some members fearful if they 'come out' expressing anger at the secrecy, including video messages sent privately to members, under the condition nobody makes any of the content public domain.  ATR will air this video if it sent to us, and protect the sender.

One trustee suggests they will need legal advice to find out why the BDA  is trying to block access to its membership, operating without consultation, being secretive, and not answering concerns about why 6 trustees have all resigned in a short time, and in such a manner.  The BDA also operate a 'gagging clause' whereby any 'whistle blowers' exposing bullies at the BDA, or amidst members, risk legal action.  It's clear a number of BDA members are fearful of being attacked if they vote for an EGM too.  Even the petitioner is desperate to not be seen challenging the BDA direct, why?  Don't they have a democracy at the BDA?

If members want to concentrate the BDA governance minds, then, threaten to RESIGN themselves.  The bullying has to stop and the BDA cannot do that without breaking the law themselves.  Who are these BDA people who would attack other deaf?  NAME THEM!

BDA aim as registered with the charity commission:  TO RELIEVE DEAF PEOPLE AND TO ADVANCE THEIR EDUCATION AND TRAINING.

WTF does that mean?

#1  "Why are you not allowed to include the confidential names in the total call?"

#2 "To be clear, I am going to include those who want confidentiality in the total call. However... There are several valid reasons why they have asked that their names should not be public - been bullied, fear of being bullied, live in same place, friends, small Deaf world, etc., etc.. Very sad.