Launch for Radio show for the deaf and Disabled..

Just how do BSL users who are deaf access a radio show?


Exeter's community radio station Phonic FM, has launched a new radio show all about disability. Accessibility Matters, is an informal chat and music show, raising the issues faced by people with disabilities living in Devon and the South West.

The show is a collaboration between Phonic FM and Living Options Devon - a user-led charity which provides vital support to people with disabilities. Staff and volunteers from the charity will appear on every show.   Andrew Barge, chair of trustees at Living Options Devon, will host the monthly shows and jumped at the chance to raise awareness of accessibility issues over the airwaves.

He was connected to the radio station by Paul Giblin, who presents The Future Sound of Exeter Show on Phonic FM. Accessibility Matters airs every 2nd Wednesday of the month on Phonic FM Andrew said: "Having some radio experience as a sports commentator for BBC Radio Devon, I was really keen to do a radio show and when Phonic FM approached us with a slot it was the perfect way to showcase why accessibility matters.''

When the first show aired last week, Living Options CEO, Diana Crump, initially felt a bit jittery talking on air, she said: "All a bit nerve wracking to start, but I ended up quite enjoying it! "It was lovely to talk about the charity, remember how and why it was founded and how we continue to provide great services and support for people with disabilities and Deaf British Sign Language Users across Devon and the South West."

SOURCE
Posted by MM at Wednesday, September 18, 2019 No comments: 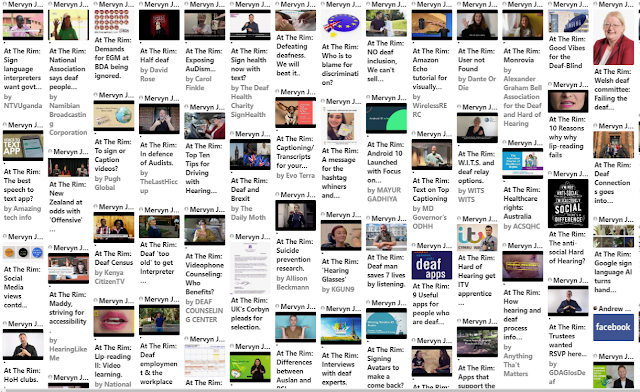 Don't get bogged down in trivia or feed the paranoia

Read real News as it happens.
Posted by MM at Wednesday, September 18, 2019 No comments:

Email ThisBlogThis!Share to TwitterShare to FacebookShare to Pinterest
Labels: ATR, ATR UK, monthly round up

WELCOME JOIN US! Join over 100,000 people enjoying Scottish buildings this September! Doors Open Days gives natives, new arrivals, and visitors free access to over 1,000 venues and events, many of which are not usually accessible to the public, across Scotland every September. This year, we are celebrating 30 years of Doors Open Days with an incredible programme of events, from swimming pools full of flowers to tours of Scotland finest buildings hosted by refugees. Doors Open Days happens because of our army of volunteers.

They donate over 29,000 hours each year to throwing open the doors of their local landmarks to welcome festival visitors. They are supported by our team at the Scottish Civic Trust, who manage the event across the country, and area coordinators, who create and manage local programmes. We believe that the more that people are involved with Scottish culture and heritage, the richer it gets. We want Doors Open Days to be the event that makes natives and new arrivals proud to be Scottish, and our visitors just the tiniest bit jealous of our shared history.

Doors Open Days is part of European Heritage Days and Scottish Archaeology Month, coordinated by Archaeology Scotland. Both are supported by Historic Environment Scotland. Find out about Doors Open Days BSL tours under the ‘Visiting’ menu. We are working with the British Deaf Association Scotland to continue to add BSL programming in the future. Please get in touch if you want to be involved in developing tours, volunteering as an interpreter, or if you are a venue that wants to learn more about offering BSL tours.

ATR:  Does this mean deaf clubs are to have 'Open Doors' too?
Posted by MM at Wednesday, September 18, 2019 No comments:


In contrast to many UK BSL interpreters determined to protect their freelance status.  Mainly so they can pick and choose when and where they work, which is areas of the UK meant deaf claiming welfare and support failed because of lack of that support turning up.   Far better we had a system based support system that doesn't rely on that making it far easier for the deaf to be confident support will be there as a norm.  A captive area with dire support shortages is inhibiting access and inclusion.  A system run set up would address that.
Posted by MM at Wednesday, September 18, 2019 No comments: