Do you Watch SEE HEAR? 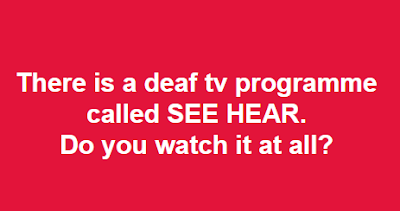 Our occasional contentional delve into current issues Hard of Hearing discuss, this time its the Deaf SEE HEAR Progam.


#1  No, I stopped watching it years ago. There was a huge row between those with hearing loss and the BSL using area at SEE HEAR a few years ago, where SH consistently refused to include other people deaf who did not sign or, include the HoH at all. It blew up at the BBC feedback site and ended with the BBC removing ALL feedback, because they claimed HoH were discriminating by demanding access to See Hear which was a BSL area only, pretty unbelievable given the BBC remit was based on inclusion!

The non-signing deaf did not give up and switched complaint to the BBC's disability site, the BBC removed them from there too after disabled and BSL people complained, this was because of deaf issues about the disability status of the deaf it became a hot potato that disrupted the inclusion process at the BBC.  The BBC's answer was to kill HoH feedback and the BSL one mostly because it became hostile.  Now the BBC has sanitised the disability and deaf areas and only those who 'don't rock boats' get any input, inclusions, or publicity.

#2 The BSL area is oversubscribed in access terms compared with the rest of us, having TWO TV channels SIGN ZONE (another blatant my way or the highway deaf and free-funded propaganda machine that ironically few deaf know about online), that tried initially to include then gave it up.  With no related HoH content no point in watching it.

#3  The 'Deaf' protesteth overmuch.  They have already a national support set up. and politicians helping them lobby for more exclusive access, the disabled and HoH were dumped by the BBC basically because these deaf used culture to stop us being included, it (SEE HEAR), exists as a constant red-rag to the HoH bull, or plain ignored.  The reality is the BBC wants out as well, and has removed it from prime time viewing to obscure night-time slots, different days and times when people aren't at home etc, but the Deaf haven't taken the hint, and demand it stays even if just 1 deafie looks at it, so the BBC won't pull the plug, mainly because these deaf would immediately claim discrimination.  It is all so pointless.

#4  The Achilles heel of the BSL area is its exclusivity and opposition to uniting for the common good of all, the HoH sat on the arse and let them and still does, we really need to to start fighting our own corner and go it alone ourselves, if it is OK for the BSL user it is OK for us. Of course, if we state why we need to do that we get attacked again. They use culture to batter opposition with and sign to exclude us.  The BSL gravy train pays very well for certain deaf areas and we couldn't sell hearing loss if we gave gold bars away with it free.

#5  They just don’t seem to realise the damage they do themselves with this attitude. I had a bad experience with it years ago, still won’t look at or share anything posted about or by BSL users. It’s so much kinder to myself to keep well away. Sadly, I would support their needs to the hilt in another world but this is a case of once bitten, twice shy.

#6 I wouldn't want to come across as aggressive towards the sign user, but clearly, we have totally different needs and agendas. For too long we have allowed the systems and charity to be led by a small group of people who are non-representative of most of us. I want a clean break from their agenda and campaigns, and their charities that operate discriminatory and biased so the majority with hearing loss can at least find a cause to fight for.

#7  We are too soft and accepting of the BSL area who won't include us anyway, The needs of the many, (As some Star Trek character once said), outweigh the needs of the few. There is a bigger picture here being totally sidelined. We should start by complaining about the 'Hard Of Hearing' view being represented by a BSL using person. Also to challenge any group or charity that has the remit 'Deaf and Hard of Hearing' in it. Because they are two very different areas you cannot portray as an inclusive or even communal area.

#8 I'm peed off with the many objections to clinical support for hearing loss from people who don't KNOW what hearing loss is about. Loss defines need.  The attacks on CI's etc endless demands for sign because 'All deaf cannot read or write or want anything else.'  advising people to throw away their hearing aids, it has to be dumped as disinformation, it is NOT our view. I want out basically.

#9 The BSL area is now ALL about money, as it provides classes, teaching and employment for its supporters, its carers, and its users, none of which include you or me. It does not prevent them from using our statistic to bolster their aims either. NOT in my name thanks.  That Gay American (Marco?),  rambles on about deaf not being disabled, when every issue they raise and every image we see, suggests the deaf are seriously disabled, the fact they cannot see it themselves suggests some sort of denial is prevalent.  That they insist everyone else causes their issues suggests some distancing from reality too.