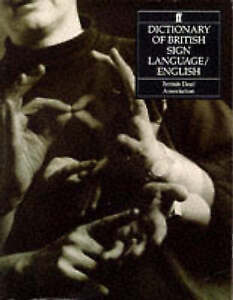 Some social media responses cast doubt on it.

"The fact is that British Sign Language was invented by a team of academics. Some of them were awarded OBE's for their work. I know this because I went to school with some of them. You need to distinguish between sign language, which probably goes back to the cave men and British Sign Language which was invented at the end of the last century. Why did this happen? Well because the UK contains many local versions of sign language. The signs used in, say Cornwall were nothing like the ones used in Newcastle.

This didn't really matter much in the old days because schools were using their own local signs and it wasn't until deaf people started to travel more that the differences in signs became apparent. I remember that some of the signs used in one place were quite rude when used in another place. This gave rise to some unfortunate misunderstandings.

So that is why a number of interested parties got together and wrote a standardised form of sign which would be used throughout the UK. They didn't suppress the local signs but many of them were changed to become the equivalent in BSL.

The BDA were very involved in all this and ever since they have become pretty much the guardians and mentors of British Sign Language. They always refer to it as BSL because the old local signs are still out there being used by an older generation. At the moment BSL is said to have a vocabulary of about 35,000 words. That is not very many by the standards used for other languages but it is being added to all the time.

Of course we fingerspell anything we don't have a sign for and that doesn't count as vocabulary! But the fact is that BSL is developing, people have had to invent signs for computer, hard drive, mouse and so on, things which did not exist until the 1980's.

Now we are moving into space travel so of course a new vocabulary is needed to describe it. We need signs to describe things like light years and gas clouds, these will be common terms in the future.  It is hardly practical to fingerspell "module multiple locking mechanism". Easier to just have a sign that means module lock."

"Yes the myth BSL it is some centuries-old British signed form just isn't true.    It came out in 1992 c/o Durham Uni in official printed form mainly because sign language remained unrecognised without a dictionary reference to it.

I have an old VHS video from Durham pre that and it wasn't called BSL in 1990 because there was too much regional variance, Wales e.g. had a difference of near 46% to England.  The welsh alphabet (ABC), in sign is also different to the 'BSL' one as in fact are English signs for numbers etc different, so is BSL 'British' or an attempt to kill off the regional difference to create a 'norm'?

Having re-read recently the first 'BSL' dictionary it is pretty clear the compilers ran out of signs halfway through and there were numerous claims many were invented to fill space up after grassroots complained about them being non-extant.  There, we saw the same claims coming forward the language was 'changing' and 'evolving' too.  The plural sign did not exist e.g. deaf just repeating the singular form, 'Faster' was translated as the  'fast' sign used multiple times. Bingo, another 600+ signs were suddenly included.  Scientific signs also do not really exist with one deaf scientist claiming this year he has had to create his own.

Areas like genetics currently defy signing explanation.  In the academic area, BSL is a huge drawback given the deaf only refer to that 'language' as an explanation and it just isn't there sign-wise.  We could question the BSL language on the basis it is nowhere near a comprehensive one at all.  Its primary use is said to assist the deaf in obtaining literacy in English which will give them access to the terminology and understanding they need to advance.  I'm more concerned of some areas making BSL some sort of crusade or end in itself and undermining the deaf ability to use sign where it is most effective for them without a total reliance on it, given it has so limited an access option for the deaf.

As a social medium OK but as an educational and academic one not, as deaf users cannot (Or won't), differentiate.  A few years ago we saw the Paddy Ladd thing going on which still, is unable to be read UNLESS the deaf have mastered English to academic level first, and then to understand the ridiculously obscure terms he used.  Of course, the signs did not exist to do that!  Then we saw Mr Ladd finger-spelling terms in English in the USA, but it went right over the American head.  Deaf are looking silly in the USA using his terminology in campaigns to the deaf who have no idea what is being talked about other than it is 'something to do with sign language and recognising it as such...'  The yanks saw a money-spinner out of it and created 'classes' to explain it, students are still nowhere near following it, as the USA adapted the tuition and explanations to suit their own agenda, losing whatever point Mr Ladd was trying to make.

Ironically, the tome was intended for hearing people, not the deaf so no signed access was included in it.  Brits lauded it for a few weeks then ignored it,  pundits in the UK said it was based on the fairy tale 'The Emporer's new clothes'.  While deaf attempt vainly to attempt a BSL 'Catch up' with the English language, the deaf advance remains static and keeps many deaf still isolated and unable to compete with hearing, all that emerges is ya boo dogma from its activism areas, it is all so pointless and divisive.

I see some progress with young deaf utilizing technology and ignoring the negativity so much better.  Deaf activism is the Achilles heel of the deaf they want everyone to go backwards and the 'politics of blame rules.'

"I think a lot of it is commercialism. People have become experts in BSL through years of study and practice and naturally they want to be paid for their skills. The BDA for example has about 50 staff and they spend a lot of time organising BSL and Deaf awareness courses. They are well paid for this and it is understandable why they would not want this to stop.

There is a team of BSL users who work for the BBC making programmes for BSL users. This was pioneered by the late Terry Riley. People want this service to continue but it also represents a nice little earner for those well skilled in sign. Of course they do not want to see it end.

There are several Universities currently working on the development and use of BSL. They are paid at the usual rates for highly qualified people and for a few it's a nice little earner. Why would they want that to end? So it is apparent that there is a big movement to support and develop BSL in spite of the fact that evidence shows that its use is declining.  The reason why it is declining is because people are able to hear better. In the last 20 years or so we have seen unbelievable advances in electronic hearing devices.


This is unprecedented of course. Nobody ever imagined that deaf people would be able to hear and it is completely in opposition to those already leading a Deaf life. But... it is what people want. No matter what anyone says, that is what people are doing."

Much of the output of ATR is to highlight what you say, the commercialism of sign language by vested interest like charities and colleges and free-lance 'Cultural' advisors who throw in Milan as well as BSL via a paying class.  Once jobs and a wage comes into it, a new ball game exists, the disabling factor has to be got rid of or it won't sell, it is an encouragement for more of the same and those expressing concern about inaccuracies and bias etc (After all, deafness isn't a commodity like sign is and can be sold), then friction occurs where disability and deafness meet. Support gets a re-brand to empowerment, and deaf people get a culture as a legal onus if you debate against, and the blanket terminology "all deaf sign" starts to prevail despite statistics not bearing that out at all.

The collateral damage of those who endure issues deafness present are ignored. One stat suggested more hearing than deaf sign yet, the deaf continue to complain no hearing are signing to them, go figure.  Commercialisation isn't cutting it either? It is why hearing loss awareness has failed completely, had that had a sale feature, BSL would not get a look in.
Posted by MM at Tuesday, December 24, 2019 No comments: