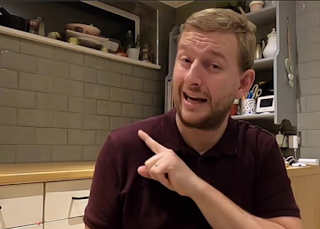 [There was a video link with this but the poster decided he did not like comments levelled at it by ATR, so blocked it!].

The bias of this individual who makes a living supporting sign users is pretty self-evident.  Like many others, he obscures the real issues of communication with 'cultural' and access provision shortages or unawareness.  Sign won't work without help and that is the basics of it.

Here he talks about BSL 'preservation' and 'purity' attacks DIY'ers who go online to teach what little sign they know rightly or wrongly, but the real issue is not about sign language alone, that is just one means the deaf use to communicate and communication is the primary point of it all, not culture not even what sign is correct or not,  as the primary aim is to be UNDERSTOOD, if a 'rogue' or DIY sign is being used but still works, then that is OK.  If we are to believe cultural claims hearing gave sign the status it got and improved on it.

ATR did the ABC and numbers of sign on a vid recently, they work for me I don't really care if a few 'experts' suggest that is different to what they use, as I promote what works for me.  In essence, ATR is simply reflecting the diversity in our deaf world. That the BSL dictionary is mostly made up and they have no norm as such is their own fault.  It was a clever move but isn't standing up to real testing.  Deaf 'communities' such as they are, consist of many many deaf who sign poorly and read and write poorly too, it is inevitable people will just do their own thing.  The lack of access (Or impetus), by these areas, to go to further education doesn't help either.  Leave deaf school come to a halt try to manage.

Deaf will still be impoverished culture or sign-wise if their academic attainment is reliant on current approaches, i.e. being a challenge to the English grammar, having insufficient signs in academia, and then promoted/supported by people with poor academic and sign skills anyway (Or as some suggest, are being manipulated by the more able and vested interests of the deaf/hearing world for personal kudos and gain).

The price it costs for 'selling' BSL as a commodity, once work/fees/money/coursework is involved then the deaf had to compete with all comers and were outclassed basically as the teaching qualifications the deaf had to master first, they were not really able to attain because of the grammar issues.  It was farcical some deaf teachers were utilising hearing terps in classes.  Only those able to lip-read better and had useful speech really made any headway.

The focus often went from the deaf to the terp who was offering different 'interpretations' of what the 'teacher' was signing/saying themselves, the teacher had become the 'client' and the subconscious switch to that status rendered issues to the deaf sign coursework. The BDA challenged established BSL classwork declaring their sign used by 'real deaf' was the more correct and rejected teacher qualifications as discriminatory. Two versions then existed in addition to the poor deaf signing, regional variations, and hearing versions of sign tuition.  The BDA lost out unable to really challenge hearing they relied on.

To be fair this terp signs a whole lot better and is a lot easier to follow than the 'real deaf' who insist it's their way or it is all wrong, and for most, very difficult for anyone to follow as they all insist their way is the right way.  They are just doing what we all do and promoting how it works for us, but, condemning others doing the same thing as they are.

Regional sign e.g can cover a myriad of excuses for poor signing and even arrogant deaf judging of hearing learners of sign, costing them £1,000s in fees because one arbitrary or other judge says his regional sign is not the same as what they are using, thus rebuffed by these deaf judges the learners abandon the qualifications anyway so deaf lose terps who could have aided them. Some go online and try to capitalise on what they learnt so far and to get their money back.

A plethora of 'cultural centres' and signing lessons and awareness is emerging undertaken BY these deaf (and by hearing teachers to the deaf), but no two 'BSL classes' are the same, or most are rabbiting on about Milan to suggest they are more cultural than they really are, given 9 out of 10 have zero deaf histories themselves or their families, which adds to the confusion, they need a norm, and it all needs sorting out.   To be completely honest 'culture' gets more funding so many use the term for everything about the deaf, even HoH have used it because the charity remits are linked even to disability.

At present, the emperor's new clothes ( this expression is often used to describe a situation in which people are afraid to criticize something because everyone else seems to think it is good or important.), and it seems a more apt description of what is going on.  The confusion seems the primary aim of prominent deaf activism approaches, harder to hit a moving target presumably.

We all need to question more, and defend the indefensible a lot less.
Posted by MM at Saturday, April 04, 2020