Where is the Deaf Plan B? 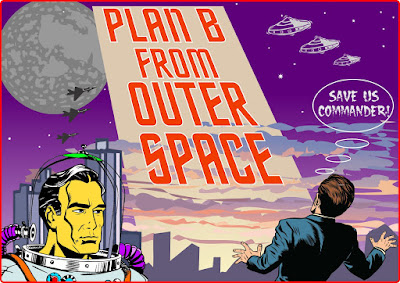 There is Angst on some BSL sites of people saying they should stop using BSL interpreters and make more effort themselves.  Which launched a Deaf tirade at the English language, it's grammar, it's users(!), and anger the deaf culture and language were under attack.  Alternatively.....


I suspect the negativity comes from hearing (And HoH), who see BSL support NOT as empowerment, or a right, but a necessity and needing a life of reliance, supporting the right of BSL terps, but it then follows deaf are, or have, a 'problem' (They can't do anything without that help), and the terp is visual 'proof'.  Two is company, three an issue...

Hence why deaf are angry that reliance was being attacked, that sign alone is little use without it, but you won't see deaf admitting it. A lot still exist away from mainstream almost totally on a social level, so long as they have that they won't understand the access and inclusion things that mean you have to move away from that and into the mainstream area, there is a mental struggle with it and a fear they cannot integrate even with help.   This is totally true of migrants e.g. entering the country for work, they know knowledge of the language widely used is key to their future, and they still retain their own.  They adapt, the Deaf cannot or won't?

There are areas (Mine included the deafened), who feel the root is the insistence on being reliant on a single mode to communicate that needs translation, it's a 'barrier' before you start. I do feel BSL isn't enough. If I had to rely on it, I would be in serious trouble trying to get the help to make it work and I have a voice of my own so prefer to use that not someone else's, so you see other deaf areas do not always see it as simple as the BSL user does.

We have had to make do as best we can, and without BSL, without interpreters and at the start without a deaf social service, without 888 even. Bitter experience has taught us BSL was not much use at all, there were NO BSL classes, NO Lip-reading classes, NO acceptances by BSL deaf, and no support of course. We will survive without BSL and don't feel there isn't an alternative or other skill we can use.

I would never put rights in the way of my own access that is silly. I wouldn't say NO BSL terps, some would seriously suffer without it, which tends to prove the point.  I would just say deaf need a plan B.  I just think those campaigning AGAINST English are just making their own access even more remote a possibility. When faced with the poor viability of one mode, or that mode just isn't enough,  logic suggests you need an alternative.  We should not make a lifetime of reliance a virtue,  or worse a right of some kind, human nature suggests we don't want that.

We do need to expose the 'smoke and mirrors' of rights lobbies determined to hide the deaf reality and label it something else entirely.  If it quacks it still tends to be a duck.