BBC to close their text service.

Deaf social media on the BBC's recent declaration they are removing their TV text service.

ATR: We read this before we quite liked that service as it was essential before we all had access to the net on phones etc, but bear in mind many older deaf (Reputed to be above 60%), still don't access online and now won't have access via their TV anymore.   We appreciate apps and the net have moved on but the text access on your own TV set was a ground-breaker in access terms as was 888, sign language never was and still has issues of being viewed and complaints about content not being inclusive.  The text service also gave insights on medical, scientific and technological advances it's all in one place.  It was a one-stop Information area easily accessible to all.

The BBC used to have 'No Need To Shout', etc (A text-based feedback/letter site on the BBC), that ATR was a major contributor to, run by Chas Donaldson but later ruined by a BSL clone who drove feedback away), also a regular weekly RNID feedback social site, but the BBC's archive on deaf access omits text-based output coverage for some reason, no doubt it is political and run by atypical incoherent hashtag-based idiots now entrenched there.  Most want the licence got rid of so this appalling and biased TV channel gets sorted out and its right to raid our wallets with impunity removed, not least because it allows persistent and biased false images of a sanitised deaf and disabled community to tun riot.

It is yet another assault on our diverse access need, by the BBC who also removed all deaf feedback to SEE HEAR on their site and installed these disabled who won't question blocked access instead so they can be some 'elite' within this deaf world they create for themselves. The RNID followed removing their open forum so we could not provide feedback publicly to them either. And as ATR posted only this week sold off its deaf care homes. It all seems silly given 90% of online output is text anyway.

We get deaf 'luvvies' now from the smoke (London),  doing their thing which has no link to the realities of the deaf anywhere else. Proclaiming access nobody else appears to have but them. 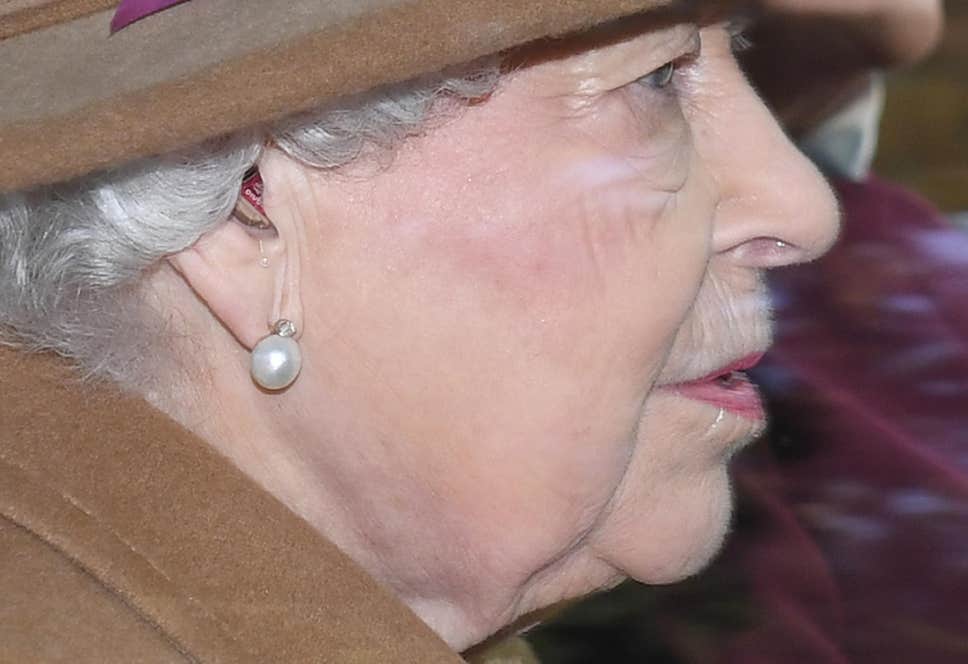 Forget the Harry and Meghan roadshow, and will they? won't they? go with their dogs to Canada and then make a mint on Instagram trading on their royal status in case UK taxpayers decide to cut them off... And Meghan insisting American media will leave them alone to pursue social media money-making and the odd game of polo.

This is REAL News (For those presumably without a life that is). Let's face it the old gal is into her 90s now its a wonder she can dribble a speech these days let alone listen to the sycophants that surround her or bring unruly spoilt grandkids of dubious parentage to heel.  Apparently, she has the wrong aid in her ear..  ATR apologises for the article's lack of coherence but it appears to have been written by an 8yr old so bear with it.

The hearing aid is visible as the Queen Elizabeth II arrives to attend a morning church service at St Mary Magdalene Church in Sandringham. The Queen has been spotted in public wearing a hearing aid for what is believed to be the first time. The 93-year-old was pictured with a brown and red device lodged in her right ear as she arrived by car at Sandringham on Sunday wearing a camel coloured coat and hat.

It comes five years after her husband the Duke of Edinburgh was seen wearing discreet behind-the-ear hearing aids too (They are still looking for his old one after he upended his Land Rover on a  motorway believing he had right of way to everything).

We wonder if we can get hearing aids by 'Royal Appointment' now? The type used by the Queen appear to be 'in the canal' hearing aids.  The NHS England website states these "aren't usually powerful enough for people with severe hearing loss".

Guidance states hearing aids are only helpful if someone still has some hearing left and can help wearers pick up on every day sounds like doorbells, phones, and speech if their hearing is beginning to fail. Members of the public clapped as the Queen left the church after the service.

She waved from her car as it pulled away. It comes as the Queen is set to have crisis talks with Prince Harry tomorrow at the royal estate in Sandringham.

My life with hearing loss 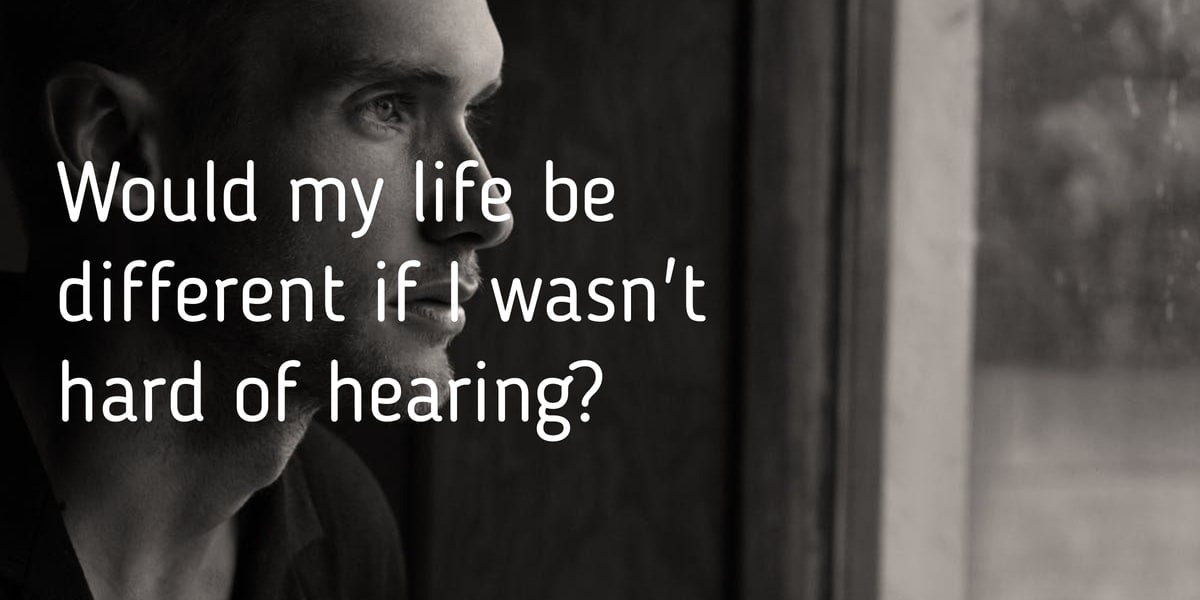 ATR recommends this blog written by Steve Claridge, as a deserving read.

"I’m 45 years old now, I have been steadily losing my hearing since I was 5 and have been wearing hearing aids on-and-off for most of that time. Here’s my story:

At the age of 5 my parents took me to the local doctor because I was sometimes not responding to them when they talked to me, the doctor referred me to the ENT department of the local hospital. I was diagnosed with a sensorineural hearing loss and came away with a pair of BTE (behind the ear) hearing aids that had full-shell molds, the piece of the aid that went behind my ear was pretty big and bulky and the bit in my ear took up the whole space and pressed against the sides — I hated it and didn’t want to wear it.

As this was 30 or so years ago, the hearing aid was an analogue device and did not have the sound quality and speech recognition that today’s devices do, it basically just made everything louder. My parents made me wear the aids to school and I do remember wearing them in class, but my Mum said, years later, that I didn’t wear them at school for long.

I used to wear them up to the school gate and then take them off for the day, only to put them back in at home time so Mum didn’t realise. I remember being teased by the other kids about them, not a lot though, nothing sustained or evil, just the usual level of joshing that kids do with each other — some other kids got teased for being overweight, having ginger hair or other minor reasons, I got it for my hearing loss, to be honest I don’t remember it bothering me that much.

So after a short while, I stopped wearing the hearing aids, I guess even though I wasn’t too bothered about teasing I still wanted to fix it, to be normal and not to stick out. At the age of 5 I had a minor hearing loss, I missed the odd word and probably didn’t hear people at times when they were not in front of me. I left education at 18 and I didn’t wear my hearing aids at all after that initial period. All through school and college I was sitting near the front of the class so I could hear the teacher.

During those years my hearing was getting progressively worse, what started off as a minor loss became a moderate one and as each year passed it became more and more difficult to hear in noise, in groups and when people were not directly in front of me. During my early teens, my parents took me to a private hearing aid dispenser and I got a pair of small in the ear (ITE) hearing aids that were by no means invisible but were much less noticeable than the old hospital ones.

They were also a lot better at blocking out noise and allowing me to hear. By now, I was a teenager and the need to be cool and to fit in with the group was way more powerful than the need to hear, so I didn’t wear any hearing aids, despite it starting to become a real problem to hear every day.

By the age of 17 I was missing quite a lot of what people were saying so I was trying to cope in different ways. Lip-reading and watching the body language of the speaker were two things that worked incredibly well, over the years I’ve become very adept at lip-reading and when you watch someone’s body language quite closely it is surprising how much you can understand about the meaning and intention of what they are saying.

I did things that were less useful, I laughed when someone finished saying something I didn’t hear, I changed the subject if someone told me something and then a while later asked me about it I would say I’d forgotten about it instead of saying I never heard it. Often, rather than asking someone to repeat themselves I would just respond to what I thought they’d said — their laughter when I said something stupid was crushing and entirely my own fault."

Experiences can vary considerably of course but an excellent, if  potted version of the anguish and mental pain that can come with hearing loss.  Interesting in that the perceived dilemmas regarding identity or culture were non-apparent.

Of course, our times were different too so issues were quite different and black and white then, and there was no avenue to fight or confront huge disadvantages laid at our door.    I get responses 'Oh, that would never happen today!' but I am still seeing that it actually does..  Like the blogger described, I put all my considerable experiences down on paper a few years ago, as a more 'putting thing behind me after 50 years thing' but clearly I haven't and probably never will, as hearing loss defined me as a person and individual but left me in a permanent 'no-man's land' in reality.

ATR did write to a publisher who had an interest in issues of hearing loss, (And has been approached twice since), but the publisher said 'It is all about sign language now and to be honest, nobody wants to read negativity, if you could rewrite parts with a more positive slant then certainly we would consider publication..."

I decided (A) I would not take him to task for non-awareness and (B) OK nobody was going to tell me it would be better if I jollied it up a bit.   Personally, as regards to running frustration off, the only running I do is at systems that make issues for me and mine and put myself centre stage so to speak to confront issues of poor access and awareness, it is a thankless and unappreciated task I set myself and I get kickbacks from HoH and the deaf alike because I am not an A or B person.

That is their hang-up, not mine.  Obviously, we all have a right to tell us how it was for us, but putting it to print.   I still never consider myself really disabled despite every single clinical area trying to convince me I really am.  If it came with cash I might have gone with it since there is no mileage in hearing loss alone you have to have some 'edge' these days.

That is not so to say I have ever joined a deaf or a HoH community since I never did that either and my hearing membership is somewhat iffy if truth be told.  I will probably curse hearing loss until I am no longer able to.
Posted by MM at Monday, January 13, 2020 1 comment: