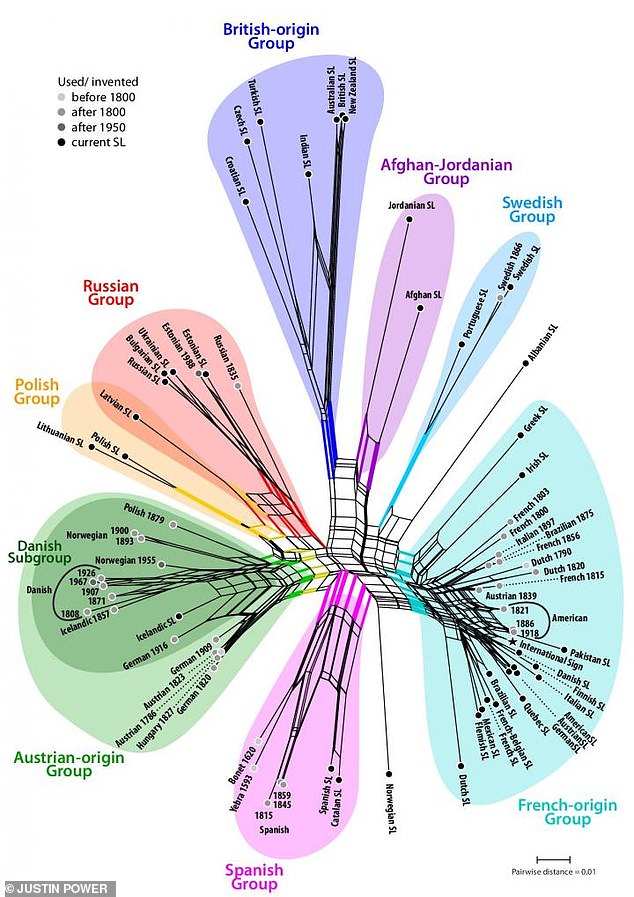 Linguists have long studied the origins of human speech, with two centuries of research dedicated to unravelling the birth and evolution of human dialogue.

Researchers from the University of Texas claim sign language has been far less studied, despite being 'at least as ancient as speech'. Justin Power, a PhD student at the University of Texas in the US and first author on the study, said: 'While the evolution of spoken languages has been studied for more than 200 years, research on sign language evolution is still in its infancy. 'Much of what we know about the histories of contemporary sign languages has come from historical accounts of contact between deaf educational institutions and educators.

'We wanted to know if a comparison of sign languages using contemporary and historical sources could shed light on how European sign languages have developed and spread around the world.' The study, published in the journal Royal Society Open Science, assessed a total of 76 sign language 'manual alphabets'. Manual alphabets are forms which signers use to spell written words using a sequence of hand shapes. These are known to date back as far as the 17th century following the creation of educational institutions for the deaf during the European Enlightenment.

These subtle similarities and relationships were then used to map out their evolutionary lineages. This allowed researchers to create a physical map of where and when sign languages spread across Europe and then around the world. For instance, the researchers found the influence of French Sign Language on deaf education and signing communities in western Europe and the Americas. In addition, the team was able to trace the dispersal of Austrian Sign Language to central and northern Europe, as well as to Russia.

Mr Power said: 'The network methods allow us to analyse in detail the complex evolution of complete lineages, manual alphabets, and individual hand shapes. 'Integrating these methods with our research into historical manual alphabets gives us a powerful framework for understanding the evolution of sign languages.'

This article originates via Texas USA, but isn't supported globally.  While deaf developed basic signs based on mimicry, it was HEARING people who worked at creating a bona fide 'language'. The USA also declared uni-sign did not exist nor, was sign able to carry over effectively in different countries and as explained via Martha's vineyard, it was unsustainable once closed communities developed options to move out.  Sign (In the UK anyway), still hasn't been proven, as the BSL dictionary lacks 70% of necessary signs and contains next to no academic ones.  USA 'experts' are still trying to decipher Paddy Ladd's explanations which contained no sign explanation at all because the signs aren't there..
Posted by MM at Thursday, January 23, 2020 No comments: