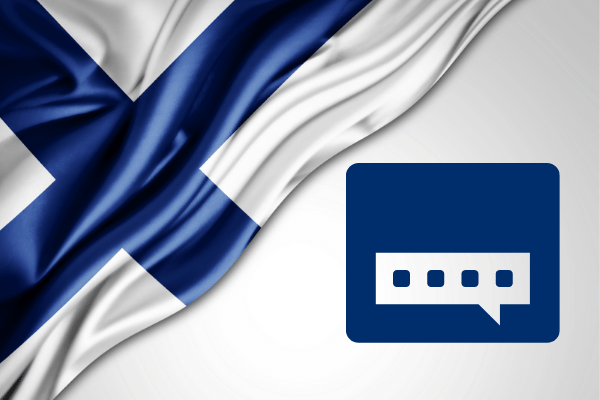 Finland is the latest European country to roll out a new set of quality requirements for subtitles in television programs. The quality recommendations comprise two sets of guidelines; one for Finnish subtitles and another for Swedish subtitles. (Finland has two official languages, Finnish and Swedish.)

The AV Translation Center published the recommendations on January 27, 2020, and the Institute for the Languages of Finland (also known as Kotus) endorsed them in a January 29, 2020 website post. The guidelines are the culmination of efforts by a working group that included language professionals from organizations such as the Finnish Association of Translators and Interpreters (SKTL), the Association of Language Experts, and Kotus. Eivor Konttinen, a translator and editor for Finland’s national public broadcasting company, Yle, explained in an April 2019 interview with Sprakbruk magazine that the Finnish initiative was inspired by quality criteria developed in Norway in 2018.

Denmark’s own guidelines soon followed. According to SKTL, the recommendations are meant to create consistent subtitling practices, set quality standards for subtitles, and consolidate vocabulary used in the field. The working group also hopes that the recommendations will help subtitlers avoid negative influence from practices in other countries, especially the US. Anna-Maija Ihander, a participant in the working group and a subtitler for Yle, said in a January 2020 interview that the recommendations are meant to be used by different channels and streaming companies.

Maintaining original cultural references prevents “over-integration,” which takes the viewer out of the immersive world of the program. A number of organizations have already signed on to the quality standards, including Yle, MTV, and Alfa-TV, as well as language service providers BTI (IYUNO), Pre-Text, Saga Vera, and Rosmer. Others are expected to follow. Although Netflix has not yet signed on, Ihander said that a Netflix representative participated in the working group. She added that Netflix has recently updated its Finnish Timed Text Style Guide. SKTL said the working group plans to make recommendations for same-language captioning, again for Finnish and Swedish, later in 2020. ADULT humour, topicality, and the deaf, can interpreters hack it?  And can the deaf take a joke themselves? What you don't want is to change the dialogue to suit the deaf. We should be against anything that has a hashtag in front of it.  If you have to explain a joke no point.  It seems deaf want inclusion but not the ribbing they could get with it the same as hearing do. People like Robbie Williams were really funny guys, so OK he walked the edge now and then.  That is the best kind of humour and indeed very pro-active in making nonsense of bigots, and bringing the stuck up themselves down to heel.  Interpreters are there to translate and need to stick to that.  Deaf don't need prompting when to laugh!

"Once he noticed an American Sign Language (ASL) interpreter parked close to him, Robin Williams, like many other comedians, had a habit of getting crude with them. In one performance posted to YouTube, Williams addresses the interpreter as though he is an exotic carnival act. After the interpreter dutifully signs something Williams spoke, the comedian feigns marvel and says to the audience, “How cool is that?” Facing the interpreter in anticipation of his inevitable next sign, Williams burps, “Blow me.”

The interpreter does his job, and the audience laughs — at the interpreter, constrained under lingual subjugation. Then, Williams gratuitously adds, “What a great fucking night,” imitating the interpreter’s hand gestures. He says the interaction is fast becoming “like Deliverance with Helen Keller.” Such a bit, caked with condescension, might play well with many showgoers, particularly the hearing ones. But ASL interpreters themselves may not be so charmed by a comedian breaking the deaf audience’s fourth wall. “I’ve had to educate so many comics on that,” says Emilia Lorenti-Wann, an ASL interpreter who’s worked comedy shows for the past 25 years.

She remembers one comedian who went so far as to lick the bald head of an interpreter she knows. These gags often upset the interpreter, disrupt the service they provide for the hearing-impaired attendees and call attention to the presence of those special-needs individuals who, for a change of pace, may just be looking for a relaxing night out in anonymity. Like most interpreters, Lorenti-Wann believes the comic should take care of the hearing showgoers, while the interpreter produces as close to an identical performance for the deaf audience members as possible. That requires hours of dedicated preparation beyond baseline sign-language fluency.

“You’ve got to give them an experience; you can’t just give them ‘access,’” she explains. Denise Herrera, an associate interpreter at the Rochester Institute of Technology, a New York school that often books comedy shows and has 1,200 deaf individuals among its roughly 16,000-person student body, thoroughly researches the stand-ups she signs for. (Her ASL comedy interpreting résumé includes John Mulaney, Leslie Jones, and Sebastian Maniscalco.) Even if the performer’s routine is new to her, she says, “I’ll have an idea of what they’re talking about because I read their whole Wikipedia page, or I read a book that they wrote, or I’ll have notes on what they’ve been working on or what they worked on in the past.”

She’ll also run a set in front of campus tutors ahead of time, signing along to a video performance of a comic she’s set to work with. Her colleagues may flag certain bits that need work, which allows her “more time to dissect how we can bring this joke or this concept into another language, in ASL, that will make it funny.” Fast-talking comedians like Kevin Hart mean the ASL interpreter has to be conditioned to keep pace while signing, Lorenti-Wann says, adding that interpreters coupled with stand-ups who favour timely material should catch up on the news. And if a comic relies heavily on callbacks, the ASL interpreter must be hyper-vigilant with their signs — if an item’s first reference doesn’t ring true enough for the deaf audience, the second certainly won’t hit as hard."