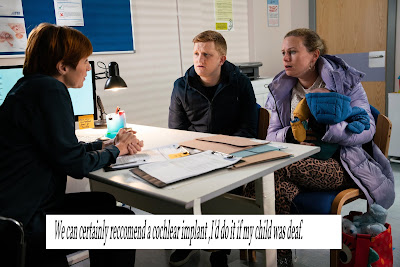 It won't be awareness because we haven't cracked that ourselves, as it becomes a contention usually.  Social media are split between the 'what a great idea!' to 'Oh no are we to go through all this again?' as differing areas argue the pros and con's of signing or CI's etc, do we really care?

Read on they are engaging already...

1 There is a report in The Sun that Eastenders is going to introduce a profoundly deaf character. Will be interesting to see how that plays out.

2 They are not introducing a new character, just RE-introducing Ben who was near deaf and wore a hearing aid when he first appeared on EE as a child, he then disappeared and re-emerged with a different face a few times and without a hearing aid (His hearing returned or something), now he has gone deaf again.

3  It is to counter Coronation Street who have gone for a deaf baby topic and to agonise over a CI or sign language etc, I'm dreading it personally, last time Corrie had a deaf signer in it, it became a bit of a lecture rather than a storyline, Deaf people playing deaf people? typecasting it won't be, will they be the D or d variety?

4  Here we go, here we go, here we go again. It will be real acting when nobody notices they are deaf.   Signers can't act because they sign.  They could never pass as hearing so typecast every time.  Playing yourself is no real effort is it? And they will be coached on what to say even then. 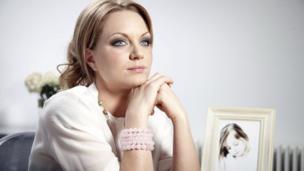 5  I recall the woman in EE (ATR photo). who really did have a deaf child and opted for a CI, she got hate messaging for 8 months from the Deaf loony fringe who accused her of child abuse. I don't think asking those deaf or their charities for advice is a great idea either.  Just awareness by numbers from them.

6 I think TV should leave 'gritty realism' to people who understand it and not insert every other minority or sect they read about on hashtag sites.  East Enders have included every awful area of the human race it can find and hardly any are white or British.

7  Isn't one the cast a white person new convert to Islam? a murderer who killed his sister?  Great casting lol  The current new deafie Ben murdered someone as well  DOH!!! enough already.    What next? they all go down with coronavirus? 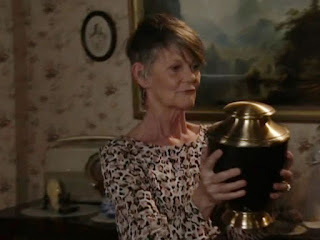 8  I like my soap operas with a laugh and not to be taken seriously, TV is dour enough without constant 'token inclusions' to screw it all up.  If I want awareness I'll attend a seminar.  EE has run out of ideas it did 24 years ago.  I'm disappointed Corrie has opted for it too.

9  They are hoping it raises awareness but realistically it will just provoke heated debate amidst deaf people getting nowhere, because 'Deaf' don't want inclusion they just want to be 'special' and do own thing just let them do it not suggest on a TV set they want something else, is there such a thing as 'fake inclusion'?  Deaf access campaigns are pretty near that.  Inclusion being only on their own terms.
Posted by MM at Tuesday, February 25, 2020 No comments: