Do what it says. 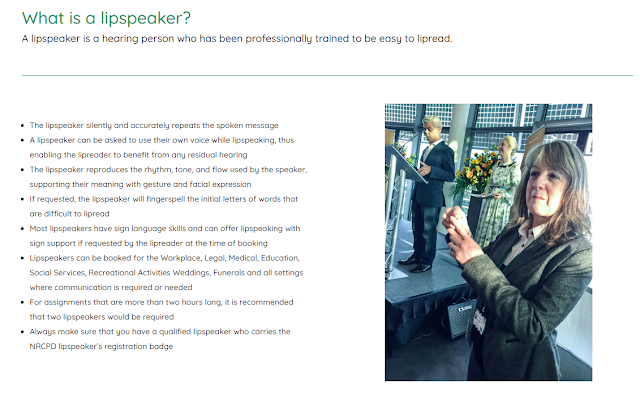 For most, mythical beings reputed to support deaf and Hard of Hearing people who have attained a reasonable standard of lip-reading despite 94% failure rates in tuition classes, and available only to those who live in areas able to meet the fees the lip-speaker can charge and has the ability to hire on a regular basis, so near all exist in the cities and nowhere else, and most concentrated in southern English counties.

The ASL listed none in Wales albeit the sign language interpreter area did list 2 with a minimum 6-8 week wait which doesn't appear to hold out much hope for its 300,000 with hearing loss.  One wonders if BSL users would tolerate such poor access provision?


What has been abundantly clear (before and since the outbreak of the coronavirus), there has been NO lip-spoken information given out.  Like the BSL area, it is assumed the lip-reader can read so do not require it, and the deaf handicapped with BSL with poor recognition of reading or writing English or its grammar, have made zilch demand for it.  On the basis of that what is the point? This has killed any impetus for many with hearing loss, to actually take up lip-reading at all.

For years concerns have been raised at the amateur/random approaches to learning to lip-read and it apparently not taken all that seriously, certainly not by deaf people, but very concerning for those with severe hearing loss or ongoing deafness who while they have no desire at all to sign, are getting no alternatives offered but a few months, a couple of hours a week competing with a dozen others in the same boat.


The system of learning to lip-read is to set you up to fail.  It was naive and questionable such classes suggest they have any ability to teach the wide variations of ages and hearing loss areas they claim to be able to help, the sting in that tail, is they cannot, as a prerequisite of any learning demands you have sufficient HEARING to do it, which makes little sense.  It's like insisting someone blind can see first.

As regards to sign use, the idea is to NOT use that and learn the alternative (Or the HoH/deafened, could just go to a sign class instead), i.e. assuming they could get in a class because most are geared for hearing people and families to 'work in the field' but at least a qualification is at the end of it and even a job if you are lucky.  It has a structured class and coursework of sorts but the point is HoH don't want it.

ATR suggest Lip-reading be taken more seriously and recognised as the vital and much wanted 'tool' for the majority with hearing loss.  We accept this demands a whole new approach to how it is taught so that it actually includes those who most need it.

As tuition stands it is if you can learn it, OK, if you cannot, that is ok too.  Don't all rush to join!  After all, there is no standard to attain, no testing to see if you are improving or level of proficiency either.  It is usually passed off as 'The point of lip-reading classes is more 'social' than anything else', and they believe that social aspect, will lead to better lip-reading via SELF-learning.  So who needs a class? perhaps all they need are viable HoH clubs.

Lots of mini 'clubs' that last 5 minutes, assuming the majority who start the classes stay the actual course and the 30% drop off after the initial few weeks (which is the norm at present), can be addressed.  We should be asking WHY this drop off shortly after classes open occurs?  ATR could suggest those with severe hearing loss cannot be accommodated by such classes and thus leave in sheer frustration.

Lip-reading IS an incredible difficult a skill to master, so in-depth and lengthy one-on-one coursework for some age-related and severe loss areas is essential, but it just doesn't happen.  It suggested the ASL and teachers are not being completely honest about how effective these classes actually are, or who it is actually designed for?

ATR requested statistics of success/failure rates and was told there are none.  If there were they wouldn't give them out, as it could have a detrimental effect on what exists now. If lip-reading is to continue as a viable alternative to sign language their act needs getting together and to admit current classes do not work for those who need it to.

Given more and more people are being deafened the lack of urgency is not good is it?  We need class testing to see how effective they actually are if only so they can be improved.