We are ALL deaf enough.

What happens in practice seems different, the USA seems more 'inclusive' of others who don't sign, but in the UK that isn't usually the case. Deaf tend to segregate 'like with like' and don't really socialise with those who don't sign on the simple grounds they say they cannot follow.

End of discussion, it's very frustrating.   There is an area of ' sign purism' that would rather not include themselves with non-signers as well, these are the people who say you are not deaf enough, as being deaf means something different to them than a profound loss of hearing. The ability or choice to sign (Or not to), is not really understood it usually results in a parting of the ways or annoyance, who makes effort is an issue signers don't unless you attempt to sign as well.   But they still won't adapt to what you are using.

Nothing further then happens.   Younger deaf are more outgoing and willing to adapt, but it seems to tail off as you get older. So that is not really accepting choice its saying you won't adapt and I cannot in most part. Everyone signed on the video, without being negative I would think, this is not to do with me as a deaf person. I don't do that I use something else, its a choice then do I attempt to integrate with the signer? or stick to the hearing world I prefer to, and use whatever helps with that?

The culture means nothing to me or the social area because my own choice was to stay with what I knew.  It seems the background of these deaf follows the same approach they stick with people and systems they know.  The 'You aren't deaf enough' thing is an extreme deaf attempt to 'defend' sign language against all other formats, choice-based or not so inclusion and acceptance are the real victims.
Posted by MM at Sunday, May 24, 2020 No comments: 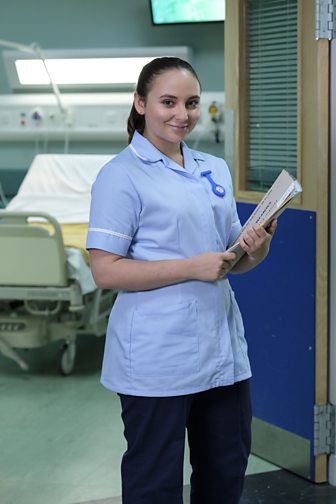 HoH not happy with BBC TV's poor awareness attempts on its medical soap opera 'Casualty' (Claiming the major casualty was, in fact, awareness itself), and failed to include or make people aware of those with hearing loss.


"Not sure if this has been mentioned anywhere but on tonight’s episode of casualty on BBC 1 there was bsl as there was a deaf patient who only lip reads and signs but there was also a deaf nurse who was an interpreter. Thought it was worth a mention on here. I believe if you watch it on iPlayer you can get subtitles."

"Do we ever get a speech to text reporter/lip speaker/notetaker/palantypist shown on a programme for the 10-12 MILLION non-signing hard of hearing/deaf folk? I seem to see interpreters for 250,000 THOUSAND signers but no mention of help for the majority?"

"I am absolutely with you on that. I'm fed HoH are playing second fiddle to someone else's awareness and the image is HoH are all signers too. I am all for inclusion and awareness whatever format is used but it is all so one-sided. You see someone deaf or someone hard of hearing out comes the BSL, why? Eastenders is doing the same, Ci's won't work without BSL either and those seeking a CI are in BSL denial or something.."

"At the start, the deaf man claimed he was a lip-reader, but the next thing we saw was not a lip-speaker, but a sign using nurse with a hearing aid instead, she was not an interpreter. HoH should complain or at least make some attempt at own awareness, but it doesn't happen does it? TV is killing hard of hearing awareness off, titles that's all we will ever need is the view. We should have seen speech to text apps there, the medical flashcards, and yes a lip-speaker too. If only to justify the fact some of us lip-read, this man clearly stated what his preferred mode was and got something BSL instead.."

"250,000 BSL users?  someone must be breeding them or importing them! even the BDA the font of all BSL claims, statistics and wisdom, only stretched it to 78,000 and got it in the neck for that, lies, damned lies."

"Who asked for a BSL terp? apparently, it was the Dr so they are out of the awareness loop as well. As someone who understands some sign language the patient deaf got few details it was all broken down to simple explanations, either they know BSL doesn't do details or assume the deaf won't understand anyway (oops!).

"Yes I saw that the Dr said 'is there a sign for haemoglobin'? There aren't any BSL medical signs, its point at the bit that hurts mostly and then ask how much... so most staff wing it using educated guesswork and tests, a system you would use on a child basically."

"They are taking out this, testing that, without explaining why, then he wandered off and collapsed (As they do on that program, someone needs to tie them to the bed)."

"We all know signing deaf can read minds, so no explanation is necessary."

"I didn’t see it but read the post I responded to which mentioned BSL or signing and that in itself meant none of the majority’s needs would be seen or referred to. The simple question “how does he/she communicate?” Would have provided the chance to refer to these differences. Those for whom sign is the first language have all my sympathy and support, but it would be nice to know they could have some sympathy for us struggling to communicate in a different world too ......"

"The bit I saw was the man with good speech. He didn't ask for sign help, the Dr requested it on seeing he was deaf, sign help was offered by the nurse (who was an ex or something), and knew he signed as well, although a bit later on in the story his wife turned up as a non-signer who he had no trouble following, continuity was all to the wind after."

"Deaf or HoH awareness a complete mess. And it all looks like token inclusion I don't see how the awareness works. But the sign is the thing so long as it is seen that's the awareness, it is never about hearing loss  The BBC needs to consult other hearing loss areas, not just the signing ones."
Posted by MM at Sunday, May 24, 2020 No comments: