BLM and Deaf lives matter too. 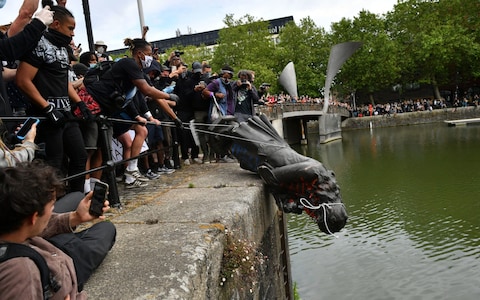 From a UK Deaf site.

The BML message is being lost and they are saying now ALL lives matter, its the only way many can express dismay at what they are seeing, or be called racists themselves.


It is all that is wrong with the UK laws on equality, they don't work, it is the road to minority rule, vested interest, bias, sectarianism, segregation,  and not majority rule, which makes the UK as much of a joke as the USA is.

The vandals and stirrers emerged inevitably. The idea was to provoke a reaction from the police so all hell could break loose.  The fact the marchers defied the lockdown because their lives are not as important as their message, ignored something else, they are target number one for COVID and now pose a health risk to us. I don't see that logic.

Me neither, Deaf Lives Matter.

The Bristol vandalism follows the route the Southern States of the USA took, trying to re-write history by removing images and reference points to it. Statues, burning books, anything related to people who supported slavery.

Not making sense, it is why their civil war was started to get rid of it,  albeit I gather Abe Lincoln wasn't entirely convinced slavery was wrong.  In their civil war, and in WW2 the USA was the only country to have segregated army by forming black-only battalions etc.    The UK had class distinctions too.

History is, if you remove references then a generation from now nobody will have learnt the lessons from it.  We have young people now who are ignorant of the recent World wars or the people in it.

Hitler and his followers created the Holocaust, and there was no way anyone wanted to remove the proof it happened.  Jews know memories are short if the death chambers were levelled there would be no focus.

Throwing a statue into the river at Bristol doesn't change the facts, and from what I saw it was white people doing that.  Why would black people want to remove those things which are proof of how badly they were treated?  Do they think nobody will know it ever happened if they did that?

I  used to go to Colston Hall to watch rock concerts, am I now a racist?  I only went to see Chuck Berry.
Posted by MM at Monday, June 08, 2020 No comments: