Deaf. Then and Now. 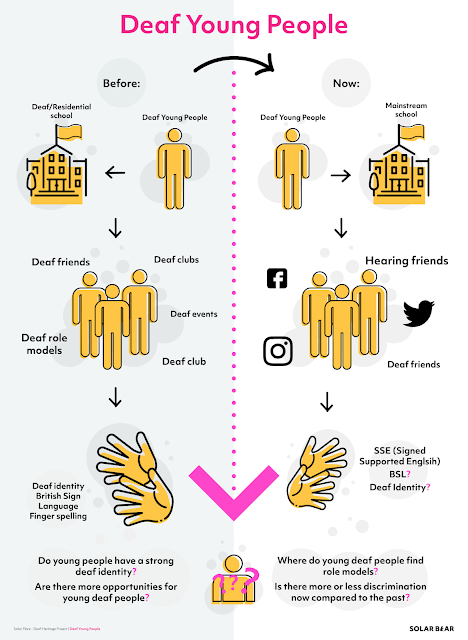 The old system failed deaf people they prioritised social above academic because old deaf schools felt there was little point making an effort to educate them and looked on deafness as a mental disablement. Girls went sewing, boys doing manual work, there was no expectation they could go much further.
To a high degree, social interaction is still all, despite considerable inclusion, medical, and technological advance, to the point many aren't bothered to integrate into the mainstream because BSL reliance disempowered them communication-wise and left with dwindling deaf clubs, interpreter reliances, and still a failure and inability to compete with hearing people due to literacy, and language rights issues.

There are numerous campaigns, laws, and proposed bills, but none are insisting on real parity as this means BSL gets relegated to second language status not first.  English is the language area they have to work in.  The campaigner views it as discrimination, but that is not necessarily the grassroots view, as increasing evidence shows young deaf are more included have more access and rights and are not opposing the means to attain a level playing field to pacify activism, they know that they need to learn how to communicate and relate to the hearing world not attend mainstream as spectators.  They want what hearing want, but that requires compromise not campaigns.

The poster reiterates the same distorted messages and alarms we can read in many places on the deaf internet.  Ergo You will lose your friends and social circle, be forced to hear (!), and be isolated unless you adopt some 'back to the future approach to education that never worked academically for deaf people, neither will a BSL-driven system work, because that is a deaf social tool, not an academic grounding to work in a non-deaf world.

The poster attacks SSE which is really what deaf should be using as this closely relates to what hearing people are using so making communication easier.  If deaf want to sign BSL socially that is fine, but it is not a viable tool to work within the mainstream. The support costs can be astronomical and unnecessary, had they attained English grammar education and knowledge day one.  There is basic view deaf want deaf so the rest doesn't come into it, they would not be saying that had the state not empowered that ignorance because they view deaf severely disabled too.  There still seems considerable confusion with deaf people who claim non-disabled status but rely on its fiance and support to exist, even for its culture to exist.

The disability sector, however, accepts support for access, and inclusion, not cultural reasons. There is no disability culture. As regards to mentors, they are such as role models only because they have made it in a deaf world and can easily communicate with other deaf, but not a hearing one mostly.  So they won't be role models in that they can empower other deaf to break the BSL mould and move outwards.  Their function basically, is to empower and promote culture, not an ability to work properly by showing the example.

Idealism has overtaken realism and practicality and is fuelled with dire warnings, and a blame culture, this is not the way forward for deaf people.  To demand hearing sign and no attempt to go halfway by deaf is doomed to failure as is evident everywhere.  Various rights campaign tend to aim at reinforcing and making deaf isolation more comfortable and acceptable, rather than any aim to move forwards or outward.

You can have a different culture and language, e.g. many migrants have these, but they also know this is the UK and they have to adapt, there is no reason the deaf cannot do likewise, after all, they can do everything except hear.... can't they?

A Bill too far?

The reality of the current push for an English BSL Bill following Scotland has resurged again despite the last attempt being left 'on the table' (Left to be forgotten). 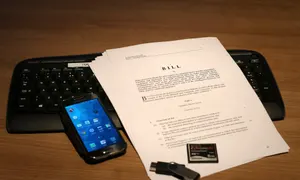 Recently a British Blog and a Liberal Deaf representative Mr David Buxton are lobbying backbench politicians to promote the BSL Bill in England after the Welsh attempt fizzled out due to lack of grass-root support, and despite English BDA deaf reps posting to welsh sites to promote it disguised as welsh deaf supporters.  For the uninitiated Newcastle is not in Wales!

What these deaf DON'T tell those politicians they lobby:-

(1) The BSL Bill can/will be used to overrule parental choices in deaf education by splitting up deaf children into BSL and non-BSL taught children.  One sector being enabled to follow the host country language and grammar, the other to discard it in favour of a visual and cultural one that the mainstream does not use.

Thus Dis-abling those children taught via immersional BSL because there are no teachers or sign academics or even academic signs to enable them as adults to compete work-wise to be educated on any level playing field.  There are just a few deaf scientists in single figures trying to invent some.  There are NO scientific, medical, or legal sign language dictionary references.  On that basis is it even a language as such?

(2) Part of the BSL Bill demand also relates to access to state systems like e.g. 999 emergency systems, and health and care systems.  Again the sponsored Bill and lobby does not clarify that 68% of ALL deaf using british sign language are NOT using professional BSL interpreters as support, in favour, of using own preferred family support, with virtually no accredited BSL qualifications.

(3)  That the promoters of the BSL access equality Bill e.g. the BDA endorsed the right of deaf patients to use family as legitimate support help, despite concerns this actually undermined deaf demands for help and endorsed system abuses of it. Thus relegating the deaf right to privacy invalid and also leaving health (And legal), decision-making to others.  When ATR challenged this as the BDA defeating the point of deaf independence and access, ATR was accused of attacking deaf people and undermining deaf right.

The issue is chicken-egg, in that for Deaf support and enablement requires DEMAND to be seen.  The idea you can demand what isn't actually there to make it happen is a moot point.   It could be suggested the BSL Bill aims to promote that demand, but there is no statistical proof of that. Logically, deaf support demands should start with a 'national' training scheme so that professional staff are there to do the job.  BSL is not a national sign for Britain, Ireland promoted their own alternative. Wales has its own alphabet but uses the English signed version. The UK is a devolved set up so a 'national' approach is difficult to attain, ergo why Scotland/Ireland (Not just BSL but ISL too), which raises issues of regional differences), has a 'Sign Language'  Bill and the rest of the UK does not. One-third of Northern Irish sign users do not use/want BSL.

Of an alleged 98,000 UK sign using deaf. ATR insisted that is a blatant untruth an unfounded or resourced figure, and suggested politicians being lobbied refer to the actual government source.

"The data that are available show BSL is the first language of 24,000 people, but there are only 908 registered sign language interpreters."

Even that source is questionable as it includes many free-lance interpreters and those concentrated mainly in city areas, so hardly a 'national support area. Registered does not mean full-time or freely available either.  Thus we refer back to the issue of deaf using alternatives and unqualified at that.  There is also the damning survey carried out by the BSLBT that challenged many aspects of BSL access and demands and the only real survey carried out exclusively WITH deaf people, as the data laws prevent any survey being undertaken in deaf (Or HoH) entirety, hence why outrageous statistics and claims continue to pour out from its activists, there are few if any ways to challenge them on a statistical basis.

Efforts to quote medically diagnosed deaf people,  or even listed state care and support provision for the deaf was ignored and gained hostility from campaigners. Free state provision of BSL interpreters tends to show less than 25% of deaf people are using them. If we include ALL deaf people then we are in single figures only.  The BDA and the AOHL also rely on the fact their claims cannot be challenged and, as they are also the sole source of them there is doubt of their accuracy.

Two primary charities who support the English BSL Bill are also set to be challenged,  the UKCoD e.g. has no significant grass-roots membership of note it is a deaf 'quango' in that is suggests it speaks for a collection of the UK's most primary charities of deaf people.  That is not true, the two major charities go their own way.  Indeed the BDA offers up challenges to the AOHL on a regular basis as they 'support' different areas of deafness and hearing loss.  Of the two, only one provides 'national' BSL care provision, but this year sold it off to private enterprise.

The other reality is that the NDCS itself has not fully endorsed the BSL Bill and the UKCoD was accused of barring smaller deaf support groups from joining, or attending meetings, because "They don't have the money to support the UKCoD."  They just want the big players.  They operate a form of financial discrimination against smaller bona-fide deaf or HoH support areas, hardly deaf inclusion. The UKCoD would cease to exist without the AOHL, the BDA or the NDCS.

It's a layer of 'representation' without an actual membership itself.  In reality, serves no function but to suggest to the politicians it is 'another' deaf voice endorsed and has to be listened to.  Politicians buy into the hype which is all the UKCoD is.  It's basically another 'front' for the real policymakers in the deaf area.  That it has charitable status also, suggests the Charity Commission has lost the plot.  Charity is widely abused as anyone can set themselves up as a 'support' area for deaf people, few if any checks are done as to their viability or if they are duplicating what is already there.  One Trustee on a well-knwon deaf charity was also a trustee of no less than  17 others making it her job for life.

Until common sense prevails in the deaf world they are being led by mean-wells and pointless people, draining the funding well dry.  The biggest obstacle to support and let us not say anything different, is that the state turns a blind eye to amateurism in deaf support because it means they do not have to honour access and inclusion laws, they  'enable' charities to do it instead, and, charity has neither means nor wherewithal to make it happen., otherwise, a BSL Bill would not need to be enacted, the deaf or disadvantaged could quote FIVE other inclusion and human right/access laws already on the statute.

The NDCS 'support' seems highly ambiguous too. Now supporting a BSL Bill that contradicts that statement?

Having said that, however, I think there is a small conflict between the title of the petition and what people were being asked to sign. The title states, “Make British Sign Language part of the National Curriculum”, but the wording asks why BSL is not taught in schools. The National Deaf Children’s Society has reiterated its position on a BSL GCSE: the society does not believe that it needs to be a mandatory part of the national curriculum, but that it might be easier for the DFE simply to approve the GCSE in British Sign Language that has already been piloted. That would make it an option for schools, should they deem it appropriate, but the DFE appears to be refusing to give the go-ahead due to a blanket policy on no new GCSEs.