I think the complainers don't understand it is a soap opera and not 'real-life'.   It's ridiculous claim to be inclusive of every minority in London, and a few new ones they invented themselves except they call them actors, soon expose their claims they are anything but opportunists and amateurs at that.  Being the BBC it is expected of them.  There are many dissenting voices who want the BBC unsupported by a licence and complaints their news is hashtag based and twitter fed as well as biased.  They just spent £85m on a new set for this televised farce losing viewers.  They have a licence to print money from the UK taxpayer and we want that stopped.  No TV channel in the USA would ever get off the ground with their attitude.

The actor portraying Ben is the 3rd re-incarnation as I am aware of 3 different people, one incarnation was wearing glasses for years until he was gaoled for killing someone, then emerging from prison gay.    Who also wore a hearing aid then didn't then did again and then went for a CI after failing to do the sign thing by using a signer that didn't really who mostly lip-read everything.

The penny still did not drop it was a soap opera. Eastenders leaves itself wide open as a sitting target because they make unsubstantiated claims of 'gritty realism', any area reflecting 'Walford' would be under Tier 3 and then some ages ago.  After overdosing on inclusion with Autistics, trans, gays, murderers, rapists, alcoholics, gangsters, lesbians, and enough BAME inclusion to counter BLM as a concept, and with paedo's etc, realism left the party about 15 years ago and it became a home-made training video for social workers and the police. As we read the anti-CI brigade soon saw a cause celeb. As they did with the inclusion of Autism and with hearing aids.  I can assure readers parents have suffered even worse reactions then go to the bottle.  That isn't denigrating the disabled individual at all it is reflecting and reacting to the sheer stress of lack of support or empathy.  Those who think caring for seriously disabled children is a well-supported doddle obviously never had any.

Not everyone gets the support to manage and can cope. There is some grand assumption they are all 'rain men' which is untrue. There are problems with consulting disabled and deaf areas, they aren't mutually inclusive themselves and today, everyone has a view of what is a 'correct portrayal' of their issue.  deaf V Deaf v disability V HI versus.... are recurring themes even on this aggregate. And they ALWAYS start and end with 'Deaf do this, you need to to do that, face me and...'  Quite obviously the storyline vanishes and its an awareness vid for someone's own idea of what awareness is, but only if it reflects what THEY think, because no awareness consensus exists.

"When EastEnders returned from its three month, Covid-imposed break, the storyline about Ben Mitchell’s hearing loss was abruptly brought to an end. He simply switched on a cochlear implant. 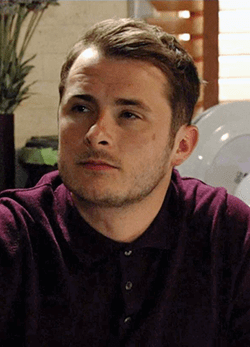 In the real world, though, months of tuning sessions and speech/hearing lessons are needed to help people get used to a cochlear implant. Even then, people with implants are still D/deaf (a term used to cover all forms of deafness) and often use lip reading and sign language as part of their everyday lives.

Yet from the moment Ben’s implant was switched on, his hearing appeared to be “fixed”. He directly described his hearing as “back” in at least two episodes. We saw Ben easily hear people who were facing away from him, including in a busy street and in a café with music playing, and speaking with a phone pressed to his deaf ear. The integration of sign language alongside spoken language in his scenes with other characters disappeared.

This is medically inaccurate. Framing cochlear implants as a “cure” for deafness is a dangerous myth that causes real harm. The D/deaf community has been pushing back against it for years. Morgan Leahy, a deaf writer and cochlear implant user, writes: “Romanticising cochlear implant technology puts further pressure onto deaf people to conform.” The myth of a “cure” can also lead to D/deaf children being denied access to sign language.

Jumping from despair, where we left Ben pre-pandemic, directly to cure also fuels a dangerous narrative that people who acquire disabilities cannot develop their disabled identity and live happily with that disability. “The end of the story just devastated me,” says Evie, a deaf EastEnders fan. “Hearing people started asking me when I was getting surgery to get my hearing back. The notion that without my hearing ‘back’, I was less of a person, that I needed to be fixed, undid years of developing my deaf identity.”

This is not the first time that EastEnders has failed the D/deaf and disabled community. They have traditionally either ignored disability, failed to give the few disabled actors proper storylines, or depicted disability as a tragedy to be neatly packed away once the storyline moves on.

As an autistic person, I had to suffer through this last year when Ollie Carter’s autism diagnosis was used as a catalyst for his mother’s alcoholism. Seeing myself depicted as a tragic burden forced me to wrestle with feelings and perceptions that have helped create a mental health crisis in the autistic community.

Autistic people are nine times more likely to die by suicide, and autistic children are 28 times more likely to think about or attempt suicide. If autistic people had been at the writers’ table, the dangerous ripples of this story would have been highlighted. But instead, the “tragic burden” narrative was reinforced. This is why it’s crucial to include disabled people at every step of the creative process.

A consultation with D/deaf and disabled people would have allowed the writers to come up with realistic ways to include Ben’s deafness (with or without his implant) accurately, without interrupting new stories: whether making it clear that he is lip-reading, continuing to integrate sign language, or using Ben’s recent police questioning as an opportunity to address his need for adjustments.

Disability isn’t something that goes away when it’s no longer the main story. And no one knows this better than us – the disabled people who live those stories.

Campaign for where is the Interpreter? 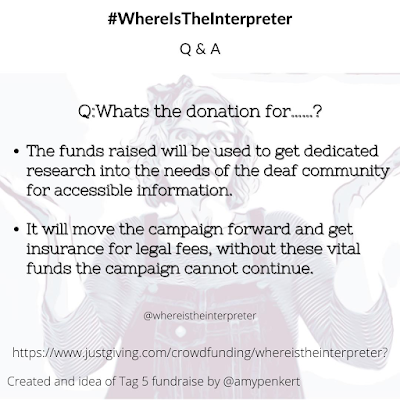 I'm half inclined to support part of the above campaign especially real research into deaf need, instead of the completely random and biased attempts to mislead we keep seeing. However, I would want research done independently and not by deaf groups or charities so we can respect the results.

The deaf need is not specifically sign language.  The BDA, RNID, and NDCS stats are all from own sources and 'think of a number' in basis. All 3 are stand-alone charities either for or anti specialising in hearing loss support. The real need is still undefined for deaf or hard of hearing people, until we actually know what is needed, it's a lottery and guesswork.

The problem is deaf politics interfere with finding out what those needs are and no area except the NHS has ever published a viable statistic to quote and that is clinically db-based..

The fact find the terp is at base suggests to me it is a very closed area of deaf people this campaign is aimed at? and virtually only one format is used or promoted which isn't reflecting the widest deaf need is it?  As covered elsewhere there have been issues of BSL Interpreters refusing to do face to face translation especially in medical areas for fear of infection so all is done by remote.  A number of BSL interpreters have said they have a right to refuse to support a deaf sign user who is demanding they take masks off, they say that deaf 'right' exposes them and they reserve their right to not comply.

All the current campaign about are because Boris hasn't a terp in downing street updates whilst all other UK regions do provide one.  Although all updates are subtitled, and all issues covered in-depth online, these deaf are saying its no use to them, and/or they want a signed version. ATR challenged the concept these short signed updates actually provide all the information deaf need on the basis of time limits, multi questions being asked and a barrage of graphs and statistics that change daily the deaf find very difficult to follow anyway.  Signed updates that exist tend not to explain them either but 'keep it simple'.

To that end ATR suggests their charities and dedicated BSLTV channels do that instead.  We are seeing deaf campaigners targeting a single area that doesn't inform them of details anyway they are making a point of access, not a point of detailed information access.  There are 'Tiers' of restrictions, local restrictions and a lot don't mirror what we actually see with Boris as 4 regions have 4 approaches.

Logic suggests dedicated BSL areas and local authorities are the real people to lobby, LA's know you and your area and near, and legally obliged to provide information in the manner you require.  Equally deaf charities who promote sign access should be backing this up anyway.