Bit of a false start the census here I had a visit from a foetus (!) telling me off they hadn't seen my census response and next visit he is bringing the heavies with him.  I told him they usually send you a letter with a password on it so you can do it online, and sadly due to our postie recently being savaged by the local cat, we hadn't had the letter with accompanying threats yet, and, erm... what if I don't HAVE online access?  He said everyone is online and can read OK, (Unless you know different).  I said I am Deaf so oppose English text being used oppressively at me this way, I demand a form in Swahili, that seemed to throw him a bit, until he asked for my carer then I thumped him. 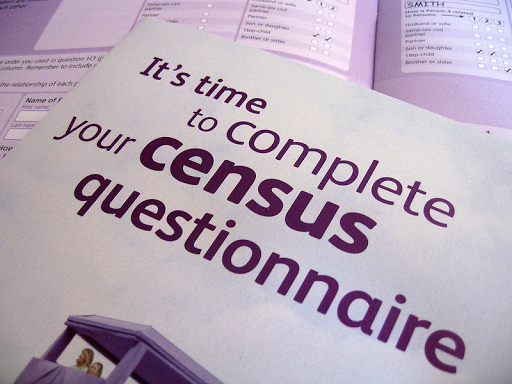 I got two letters a few days later.  There was yet another inclusion regarding what language I use, and  I was given a shortlist of 10 or more gender options, is the census officer confused?  I just wrote 'pass' can't be bothered to engage with that, Binary or digital I am not bothered so long as the app translates OK and the wi-fi still works,  it doesn't pay to encourage them, they probably have another 10 confused by now...    Was I Black? White? Ethnic? just landed on a rowing boat from France?   I just ticked 'all of the above' let them sort it.

I submitted that my usual language was obscene mostly and primarily aimed at census people. Alternatively, I am a rabid anti-social so don't speak to anyone else.   There are only so many fools I can tolerate.  I did send in a query to the national census regarding a question about sign language,  I said the question wasn't clear, it didn't ask if you were deaf or hearing, knew 1 sign or was fluent, or know stork from butter etc, they said 'It doesn't matter we only included it to shut up the cultural deaf.. they all want including these days.'

If it was anything like last time, the BSL user came unstuck when less than 15,000 said they used it, the BDA then went online declaring the census discriminated against them, and there were now 110,000 of them, I asked them, was there another pandemic? as well as covid?  But they all had masks on and were signing something or other so I never found out.    The RNID, (not to be outdone despite another re-vamp to let the Deaf know they are out of contention again), said the gloves are off and they are pursuing a deaf cure with a real vengeance, it was reverting to oral rule, supported enforced English and Literacy, then wading in and upping their hearing loss stats to 11m trumping the BDA, so clearly an outbreak of people not hearing much was doing the rounds nobody knows about and no vaccination at all for that.

I blame the census personally, they said they know they will never get real stats to determine need because there is no legal way to validate anything you say without admitting it is a state scam and trawling exercise, but it gives special branch more options and the DWP, and provides more work for unemployed fascists in these difficult times.  They can pick up terrorists and paedos who admit they are in the census making it easier than seeking them out.  I just got a post from them telling me I can access 1960 census stats now, I said waste of time I was well out of it in the 60s anyone who can remember the 60s wasn't there.....