I've got religion, well, I've had deafness, and we all need a change... this rant/blog should be accessible in sign language, but I can't be a.r.s.e.d. Some of the jokes/asides (insults) require a degree in deaf awareness, but send me a quid I'll qualify you, It will still be £249 cheaper from the pointless c.r.a.p. the BDA would send you, and I won't pester you for life or demand 50% in your will, after. 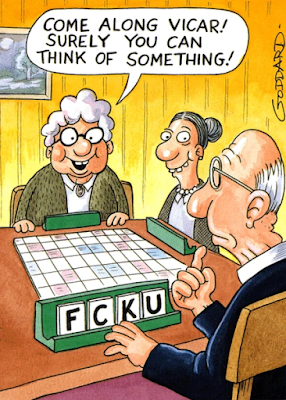 Who would true signing see,

BSL will our constant be,

Shall make the BDA relent

To be Signs leader.

Who so beset us round

Do but themselves confound;

BSL the more is.

No orals can us fright,

We will all have a right

To be a signer.

Can daunt our spirit,

We know we at the end

When fancies fly away,

We'll care not what they say,

To be a signer.

Today's Songs Of Praise comes today from the pretty little church of St Dug on the Mount in Looky likely, near Yorkshire, which is celebrating it's centenary this year.  The congregation is made up of over 16 deaf club memberships from in and around the North of England and random learners dragged in off the street.  We are gathered here today not only to celebrate the centenary 30 years early, but to pay homage to our patron saint St Dug, and his four deaf disciples, who lived in nearby Alrek-on-the Marsh, up north, and after whom the church is named, who was himself deaf, he certainly had difficulty listening to what he was told.

The service today is led by the recently re-instated Bishop Meldrew, DSO, MBE and Baaaaah (How was I to know my signing was signed English?).

"Good evening to you..... I'm going to start by telling you the same thing Elizabeth  Taylor told all her husbands, and that is - I won't keep you long!''.  let us thank the Lord whoever he may be to you, for being here today, my sermon text for this year concerns humour and how it helps us all to reflect, that life isn't all misery, boring relations, endless helpings of Brussel sprouts, and being so out of spirit, you consider Eastenders the highlight of the TV Xmas day viewing, and a few horrific deaths the icing on the cake.   Was it not our very own St Dug who said "Eeeh but owt tis nowt?"

Consider for instance,  When my daughter was about three I put her to bed and asked what she would like  to pray about.  Promptly she answered: "onions."  We prayed about onions and the next morning I asked why she wanted to pray about onions?  "Because you said in your sermon that we should pray for things we don't like, I don't like bananas either....", so it is the simplicity of the child that makes for innocence lost.

Once  I was invited to preach at a day centre for a Christmas Service as a young layman starting out in the world. I pondered How long should a good sermon be?  I decided it should be like a woman's skirt, long enough to cover the essentials but short enough to keep you interested.  So don't get too comfortable....

First the good news, and then the bad news. The good news is we now have enough money to retire the mortgage on the church and repair the stained glass window at last, the bad news is the money is still in your pocket.

I recall last year I was called away for an emergency, but not wanting to leave the confessional unattended, I called this rabbi friend from the synagogue across the street and asked him if he could kindly cover for me. He told me he wouldn't know what to say, but I told him to come on over and I'd stay with him for a little bit and show him what to do.  My rabbi friend comes, and he and I are in the confessional.  After a few minutes, a woman comes in and says, 'Father, forgive me for I have sinned.' so I ask, 'What did you do?' The woman says, 'I committed adultery.' so I said, 'How many times?'  And the woman replies, 'Three.'  'Say two Hail Mary’s, put £5 in the box, and go, sin no more.'

A few minutes later a man enters the confessional. He says, 'Father forgive me for I have sinned.' So again I asked 'What did you do?' ‘I committed adultery.' 'How many times?' 'Three times.'  So I said, 'Say two Hail Mary’s, put £5 in the box and go, sin no more.' My rabbi friend tells me "OK, I think I've got it",  so I leave him to it.  A few minutes later a woman enters and says, 'Father, forgive me for I have sinned.' The rabbi says, 'What did you  do?' The woman replies, 'I committed adultery.'  The rabbi, getting it off pat, says, 'How many times?' The woman replies,  'Once.' The rabbi said, 'Go and do it two more times, We have a special this week, three for £5.'

A ray of hope flickers in the sky

A tiny star lights up way up high

All across the land, dawns a brand new morn

This comes to pass when a child is born.

Lord, we thank thee for the signs we use, the clubs we attend, the miracle of digital aids, cochlear implantation, culture, our complete obsession with the letter D, and for the gift of having a laff no matter how often the BDA tries to spoil it all for us... we also pray for the hearing aid battery makers, that they develop a really long-lasting one...

That they find a way to recycle ear wax, and Paddy Ladd finds out finally, where the barbershop is located before he trips over himself.  That Deaf activism discovers their own front door, so they can discover things happen outside as well.  We also earnestly pray that God learns to sign properly and stops trying to cure us all...

NOTE: Those who enjoyed this blog and want to read more of the same and still allowed out on their own can read more HERE (Or even There.)  Be aware a lot will really annoy and contains the stuff of heresy, apalling bad language and the deaf cure. I am told it may be viewed offensive so don't come whinging tone after... you been told.